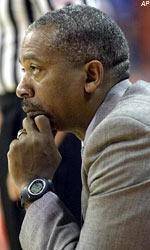 Clemson, SC – Clemson will play host to Carson-Newman College Saturday afternoon, November 6, at 3:00 PM in a men’s basketball exhibition game at Littlejohn Coliseum. It will be the only public exhibition game for Oliver Purnell’s Tigers prior to the season opener against Hampton on Friday, November 19.

Tickets are available at $10 apiece for reserved seats. A $7 ticket is also available for students high school age and under, and for general admission seating.

The tipoff was originally set for 7:00 PM, but the time was moved up to allow Clemson fans to return home in time to watch the Clemson at Miami (FL) football game (7:45 PM kickoff) on Saturday evening.

Clemson will be led by Sharrod Ford, the 6-9 senior center from Suitland, MD who was Clemson’s top scorer (11.9) and rebounder (7.2) last year. Ford ranks sixth in Clemson history in career field goal percentage (.561) and is seventh in career blocked shots (109). He ranked 21st in the nation in blocked shots a year ago.

Shawan Robinson is another returning double figure scorer for the Tigers. The junior from Raleigh started each of the last 12 games for the Tigers in 2003-04 and had a 10.8 average for the season, second best to Ford’s 11.9. Robinson is Clemson’s top three-point shooter and has a career .408 percentage, sixth best in school history.

Olu Babalola is another returning starter for the Tigers at a small forward position. His playing time in Saturday’s exhibition is unknown due to an injury that has limited his practice time recently. Babalola started all 28 games last year and averaged 9.0 points per game.

Vernon Hamilton and Akin Akingbala are two other Tigers with starting experience on the Clemson roster. Hamilton averaged 7.3 points per game last year when he started 17 games at point guard, and he led the Tigers in assists (91) and steals (50). Akingbala started four of the last six games in 2003-04 and led the Tigers in field goal percentage with a .606 mark.