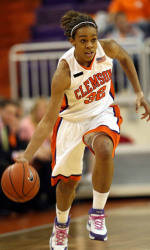 Clemson To Face #16 Virginia In Televised Contest On Monday

CLEMSON, SC – The Clemson women’s basketball team will play host to 16th-ranked Virginia on Monday night in what is now a televised contest. The game was picked up after the Wake Forest-NC State game, which was originally scheduled for the broadcast, was postponed. The Lady Tigers (12-8, 2-4 ACC) and Cavaliers (15-4, 2-2 ACC) will begin play at 7:00 pm at Littlejohn Coliseum. Broadcast Notes  The game will be broadcast as part of the ACC’s Regional Network package, which includes Fox Sports Net South, Fox Sports Net Florida, Comcast Sports and the New England Sports Network  The commentators will be Mike Hogewood and Debbie Antonelli.  The game will be aired on the radio on the Clemson Tiger Sports Network  Don Munson will call the play-by-play with Kanetra Queen providing color commentary  Livestats will be available on www.clemsontigers.com Clemson Quick Notes  Monday will be the 63rd meeting in history between the Lady Tigers and Cavaliers  The game will be the third televised broadcast for Clemson this season. The Lady Tigers are 1-1 in the previous two.  The Lady Tigers are approaching the end of their busy January schedule, going 3-5 through the first eight games with two more on the slate  Lele Hardy is approaching the 1,000-point milestone and the Clemson top 20 with 970 for her career. She is now tied for 23rd with Erin Batth, who is currently the Director of Basketball Operations at Virginia  Lele Hardy leads the ACC in rebounding with a 9.4 per game average; she also ranks third in scoring at 17.5 points per game  Hardy ranks 12th nationally in steals and has scored in double figures in all but two games this season  Hardy holds the school record with a 3.00 career steals per game average  The Lady Tigers are ranked 84th in the RPI, according to realtimeRPI.com;  Taylor and Christy Brown both rank in the top six for career assists per game  Lele Hardy 243 career steals are fourth in school history  Taylor ranks fourth all-time with 412 career assists  Tasha Taylor graduated on Dec. 18 with a degree in sport management  The Lady Tigers won five straight games from late November to mid-December after trailing at halftime, a program first  With a 8-2 record though the first 10 games of the season, Clemson had its best start since the 2003-04 season and its best record through 10 games under Head Coach Cristy McKinney  Clemson is now 2-1 in overtime games under Cristy McKinney and 19-15 all-time with the overtime win over Northwestern on Dec. 6.  Clemson won the Husky Classic over the Thanksgiving weekend, defeating Kent State and host-Washington Lele Hardy was named the MVP of the Husky Classic while Whitney Hood was selected to the all-tournament team  Lele Hardy 32 points against Georgia State on Nov. 22 were the most for a Lady Tiger in five years.  Clemson has nine players from the state of Georgia on its roster, which is tops in the nation for a school in a different state, according to a survey by the SID at George Mason Series Notes  The Lady Tigers and Cavaliers have met 62 times in a series that dates back to 1978.  Virginia holds a 34-28 advantage in those games and has won each of the last five match-ups.  Clemson last defeated the Cavaliers during the 2003-04 season, winning 60-56 at home.  Virginia won a battle in the last game played at Littlejohn Coliseum. Sharnee Zoll hit a pair of free throws with 15 seconds remaining to put the Cavliers on top, 86-82. Tasha Taylor three-pointer at the buzzer went in, but the Lady Tigers needed four points