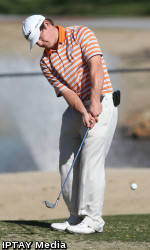 CLEMSON, SC – Clemson will attempt to become just the second program to win the Furman Intercollegiate Golf Tournament three consecutive years when the Tigers open play Friday afternoon at the 43rd annual tournament at the Furman University Golf Course in Greenville, SC. The tournament will run March 16-18 and is the closest event the Tigers play to the Clemson campus this year.

Clemson will be one of 21 teams in the event that will be played 18 holes per day over three days. The Tigers are ranked 14th in the nation entering the tournament, the highest national ranking of any team in the field. Also in the field are Georgia, host school Furman, Michigan, Purdue and ACC foe Virginia Tech.

Pairings have not been released for the tournament but it is expected that Clemson will start play Friday afternoon around noon and will play Saturday morning, starting around 8:30. Pairings for Sunday’s final round are based by the team standings after 36 holes.

Clemson will attempt to be just the second program to win the Furman Invitational three years in a row. Virginia Tech accomplished the feat in 2001-02-03. Clemson has not won a tournament three straight years since winning the Jerry Pate Invitational four years in a row from 1997-2000.

Clemson is coming off a first-place finish at the USC-Aiken Cleveland Classic March 5-6. Crawford Reeves birdied the last hole in the last group to give Clemson a one-shot victory over Virginia. It was the 62nd career victory for head coach Larry Penley.

Clemson will use the same lineup it played when it won the Cleveland Classic. Reeves has the top stroke average on the team even though he has played just two events this year due to a bad back, both in the spring. He has a 71.0 average for six rounds, including his 209 score when he finished a career best second place at the Cleveland Classic. The native of Greenville is familiar with the Furman Course and has a pair of top six finishes at this event the last two years.

Corbin Mills has a 71.39 stroke average, second best on the Clemson team. He has played in all six tournaments so far this year, but the Furman tournament will be his last for Clemson until after the Masters. The native of Easley qualified for the Masters last summer when he won the US Public Links Championship. He will compete in the Masters April 5-8 and will not play again for Clemson until the ACC Tournament April 20-22.

McCuen Elmore, a senior who has nine rounds at par or better this year, has a 72.28 stroke average for six tournaments so far this year. He finished 11th at USC Aiken and has four top 13 finishes this year.

Freshman Billy Kennerly also will be in the lineup. He has a 72.89 stroke average, but has averaged 214 for his last two tournaments. He has consecutive seventh-place finishes, helping the Tigers to a second-place team finish at Puerto Rico and the victory at he Cleveland Classic.

Clemson’s final player in the lineup was the team’s best player at Furman last year. Thomas Bradshaw finished third overall with a 209 score for 54 holes last year. That included a final round 64 that tied the Furman Intercollegiate record. It also tied for the best final round by a Clemson golfer in history and was just one shot off the overall Clemson record.