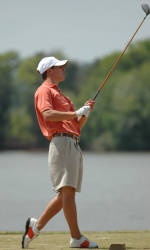 Clemson to Compete in Furman Invitational

Clemson, SC — Clemson will play its third tournament in the last 16 days when it competes in the Furman Invitational this weekend at the Furman University Golf Course. It will be the first time Clemson has played in the event since 1997.

When Clemson last appeared at the Furman Invitational in 1997, current PGA Tour pro Jonathan Byrd was a freshman for the Tigers and his brother, Jordan Byrd, was a junior for Furman. Jordan is now an assistant coach with the Clemson program under Larry Penley. The brothers tied for eighth at the 1997 Furman Invitational with scores of 218. Clemson finished third as a team behind Ohio State and Georgia Tech that year. Matt Kuchar, then a freshman at Georgia Tech, won medalist honors by one shot over Clemson’s Richard Coughlan.

Clemson has won the Furman Invitational four times with the last victory coming in 1993 with a 582 score during a rain shortened 36-hole event. Clemson also captured Furman Invitational crowns in 1978, 1983 and 1992. Mark Swygert won medalist honors as well in 1992.

Clemson will have four sophomores and a junior in its starting lineup this weekend. Leading the way is returning All-American Kyle Stanley, who has a team best 72.33 stroke average for the year. He is coming off a season best fifth place finish at The Hootie Invitational in Mt. Pleasant earlier this week.

Clemson’s top golfer of the spring has been junior Phillip Mollica. The native of Anderson, SC shot a 208 in finishing third at The Hootie, his second straight top 15 finish. Mollica has a team best 71.78 stroke average for the spring events, including for rounds in the 60s.

Sam Saunders will be playing in his seventh tournament of the year. He has a 72.89 stroke average to rank second on the team for the year. Saunders has had two top 15 finishes this year and just recently fired a consistent 215 score for 54 holes at The Hootie @ Bulls Bay.

Ben Martin and Luke Hopkins will return to the Clemson lineup this weekend. Martin has a 73.60 stroke average for five events so far this year, but has played in just one tournament this spring. He had a top 10 finish at the Topy Cup in the first event of the year. Hopkins had an 11th place finish at The Brickyard in the fall and has a 74.13 stroke average for the season.

Clemson senior Zack Siefert will also compete in the Furman Invitational as an individual. The senior has a 74.17 stroke average for the year. This will be his third event of the season.