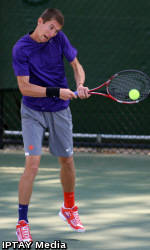 CLEMSON, SC – The Clemson men’s tennis team will begin play in the ACC Tournament on Thursday, April 19 at the Cary Tennis Park in Cary, NC. Clemson, the seventh seeded team, will play 10th seeded Wake Forest on Thursday at 12:00 p.m. The winner of this match will play second-seeded North Carolina on Friday.

The Tigers finished the regular season with a 9-13 record overall and a 5-6 mark in the ACC. The Tigers defeated Wake Forest 4-3 last Friday in Winston-Salem, NC. That was the first time that Clemson had defeated the Demon Deacons in Winston-Salem since the 1997 season.

Yannick Maden leads the Tigers in singles wins with a 24-11 record overall and a 13-8 mark in dual matches. Maden and Zachary Rigsby have compiled a 11-7 record overall as a doubles team this season.

This will be the 70th meeting between Clemson and Wake Forest on the tennis courts, the Tigers lead the series 43-26.

Over the years, Clemson has won the ACC Tournament a total of 11 times.