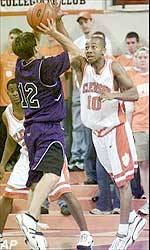 Clemson Tigers Men’s Basketball Makes It Three In A Row

CLEMSON, S.C. (AP) – Will Solomon and Jamar McKnight both had 12 points to lead Clemson in a 87-52 victory over Western Carolina on Saturday.

No Clemson player played more than 28 minutes as head coach Larry Shyatt cleared his bench midway through the second half.

The Tigers had a season-high 24 assists and just 11 turnovers. Edward Scott led the Tigers with seven assists.

An inside basket by Ray Henderson gave the Tigers a 35-point lead at 83-48 with 5:37 remaining. Henderson’s basket capped a run of six straight scoring possessions for the Tigers.

Five minutes into the game, the Tigers took command of the game with a 17-4 run that featured five 3-point goals – two by Pasha Bains, two by Solomon, and one by Stockman.

The Tigers were 8-of-16 from behind the arc in the first half.

After Western’s Casey Rogers scored a 3-point basket at the 12:44 mark of the first half, the Catamounts went almost six minutes without scoring.

When the Catamounts finally broke their drought on a basket by Todd Seibert with 6:45 remaining in the half, Clemson’s lead was 35-11.