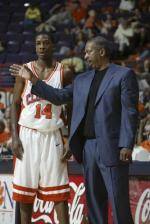 Pete Yanity, who has served as Clemson’s interim play-by-play announcer on Tiger football games since September, will provide the same role during the 2003-04 Clemson men’s basketball season. Don Munson will provide the play-by-play commentary on Clemson Lady Tiger broadcasts. Dave Hubbard of Clemson Tiger Sports Properties made the announcement Tuesday. Clemson Tigers Sports Properties is a division of ISP Sports and Learfield Communications.

Yanity took over the play-by-play duties on the Clemson football season after Jim Phillips, the 36-year voice of the Tigers, died on September 9. He has handled that task since the Georgia Tech game on September 20th.

Yanity has been the sports director at WSPA-TV in Spartanburg the last 13 years. He has also been a sideline analyst for three years on Carolina Panther preseason football games and has considerable play-by-play experience for Comcast Sports Southeast covering various college events, including Clemson football and baseball.

Since 2001 he has been the sideline reporter and host of the pregame, halftime and postgame programming on the Clemson football radio network. A 1985 graduate of Ohio University, Yanity served as the host of Clemson’s coach’s television shows in the early 1990s and will join Oliver Purnell as the host of his television show for this season.

Munson has been the host of the Clemson Tiger Tailgate Show all year and Tiger Calls, the Tommy Bowden radio call-in program each Thursday evening, since Phillips passing. He will take over the play-by-play duties for the Lady Tiger broadcasts, a duty Phillips also performed for many years. Munson will also serve as the host of Oliver Purnell radio call-in program this year. Munson has considerable experience broadcasting Clemson sporting events. He also has been the voice of Appalachian State athletics.

Sports Information Director Tim Bourret will assist Yanity on the men’s broadcasts this year. The native of West Hartford, CT is in his 24th full season working providing color commentary for Clemson basketball, the longest active color commentator in the ACC. Bourret worked with Phillips on basketball for 23 years and as Phillips’s color commentator on Clemson football from 1982-88. Bourret and Phillips broadcast over 500 Clemson events together.