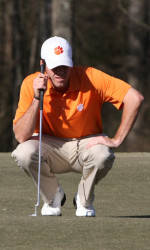 Clemson Tied for Seventh As Play Suspended in Second Round

Ooltewah, TN – Ben Martin and Corbin Mills both had rounds of even par 72 to lead Clemson to a 291 team score on Wednesday morning at the second round of the NCAA Golf Championships at The Honors Course in Ooltewah, TN. Clemson stood in a tie for seventh place when the second round was halted for darkness. There was a two hour rain delay that put the tournament behind on Wednesday afternoon. Twenty-one of the 30 teams finished the second round.

The Tigers are striving to rank in the top eight among the 30 teams at the NCAA Championships after the third round. Those eight teams will advance to a match play, single elimination tournament that will decide the national champion on Sunday.

The standings were bunched when play was halted on Wednesday at 8:45 PM. Florida State was in first place at 14 under par and Oklahoma State was second at nine under. Georgia Tech was in third place at four under par. Augusta State was fourth at one under par and Florida and San Diego were tied for fifth at even. Clemson is tied with Washington at one over par. Stanford and UCLA were tied for 12th at four over. That meant just five shots separate teams four through 13 as play begins on Thursday morning.

“We are in position to make the Final Eight,” said Clemson Head Coach Larry Penley, who has led the Tigers to 12 top 10 finishes in his 26 previous seasons as head coach of the Clemson program. “We have a chance because we battled today. We played well on our second nine, especially holes 2-8.

“That said, we have to improve tomorrow if we are going to make the final eight. We can’t count double bogeys and we can’t make sixes on par fives. That has been a problem the first two days. To avoid those big numbers we have to take a bogey if we hit it into deep rough.

“At the same time I will tell our team to play aggressively tomorrow. We can’t lay back and play conservatively or these teams will run by us. We will be in attack mode, but make common sense decisions when we are in the deep rough.”

Martin had a wild round on Wednesday, but finished with a 72 and stands at 142 after two rounds, 15th in the individual race. He got off to a poor start when he bogeyed his first two holes, the 10th and 11th holes on the course. He failed to get up and down from just off the green in both situations.

His adventurous round continued when he scored against the course statistics. He made a bogey on the short par three 14th hole, one of the easiest holes on the course, then came back with a birdie on the 475-yard par four 15th hole, the most difficult hole during Tuesday’s first round for the 156-player field. Martin also made a birdie on the seventh hole, the most difficult hole on the frontside. It was the second straight day he birdied that hole.

Corbin Mills also shot an even par 72 on Wednesday. The freshman from Anderson, SC birdied the second, sixth and 14th holes, the second straight day he has made a birdie on those holes. His birdie on the par five sixth hole was impressive. After a drive in the middle of the fairway, he hit a two-iron 254 yards to 20 feet past the hole, which had a difficult front right hole location, just above a trap. He two putted for the birdie, then played the last three holes even par.

“I putted the ball well most of the day and never took myself out of a hole,” said Mills. “I was more aggressive today, I hit the driver well and when I do that I can score. I plan to use the same strategy on Thursday.”

Ben Duncan shot an 85 first day, then came back with a 73 the second day. His score counted the last three days of the that tournament and helped Clemson to the title.

Reeves struggled at the beginning on Wednesday, but made an eagle on the 17th hole to get to even par. He hit a four iron 239 yards to with 12 feet, then made the eagle putt. He also made birdies on the second and sixth holes to finish at one over par.

“I still didn’t putt like I wanted to, but overall I kept the ball in play better off the tee,” said Reeves, like Duncan, a native of Greenville, SC. “I got some confidence when I made that eagle and held it together the rest of the round.”

Luke Hopkins shot a 74 on Wednesday after his opening round 69, still the top individual round of the tournament among Clemson golfers. He stands at one under par 143 after two rounds and is 21st individually. The graduate from Greer, SC made four birdies and now has a team high 10 for the two rounds.

His top shot of the day came on the 15th hole when he hit his iron shot from the fairway to a foot from the pin, giving him a tap in birdie on the most difficult hole on the course. He did double bogey the 18th hole for the second straight day after he drove his ball into the left rough. He has played the rest of the course at five under par through two days.

Jacob Burger shot a 77 on Wednesday and his score did not count towards Clemson’s team score, but he stands at 150 after two rounds. He did make an impressive birdie on the par five sixth hole.

“At this point it is tough to determine what we have to shoot to make the top eight and advance to match play,” said Penley. “But if I had to pick a number I would say we need to get to even par for the tournament, which would be a one under round on Thursday. I like our chances if we can shoot under par on Thursday.”