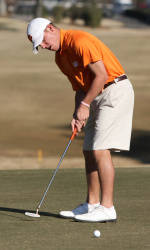 Clemson Tied for Seventh After Two Rounds of Hootie Intercollegiate

Clemson, SC-Clemson improved by 16 strokes over the first round and all five Tiger golfers shot par or better, but Clemson dropped from sixth to seventh place in the very competitive Hootie Intercollegiate golf tournament at Bulls Bay Golf Club in Mount Pleasant, SC on Monday. Clemson is in seventh place with a 54-hole score of 572, but is just six shots off the lead, which is held by LSU at 566.

LSU has a two-shot lead over South Carolina (568) and a three-shot advantage over Virginia (569). Duke and Wake Forest are tied for fourth at 570 and Auburn is sixth at 571. Clemson and Augusta State, the two highest ranked teams in the field entering the 15-team field, are tied for seventh at 572.

Ten of the 15 teams had team scores under par, including 14th ranked Clemson, who had a six-under par 278 score for the day, tied for Clemson’s low total score in a round this year and tied for the third best score vs. par this year.

Clemson actually had the lead at even par through the first 12 holes. Clemson scored 13 birdies in a nine-hole span and didn’t have a bogey to jump into the lead. But the Tigers had to count a double bogey and a triple bogey coming in.

Freshman Crawford Reeves, who was Clemson’s non-counter on Sunday, had the best score of the day on Monday with a three-under par 68. It was his low total score of the year. He played the first 13 holes at five under par, then had a double bogey on the 16th hole. He stands in 34th place individually with a 146 total.

Luke Hopkins scored a 69 on Monday thanks to a string of four consecutive birdies on holes 8 through 11. He is tied for 10th at the event with a 141 score after 36 holes.

Jacob Burger is also in 10th place after two rounds with a 141 score. Burger is at 141 after rounds of 70-71. His score could have been much better on Monday ,but he had a triple bogey on the 15th hole. He did gather himself and birdie the final hole to reach even par for the day.

Corbin Mills had a one under par 70 on Monday and is tied for 34th at 146 after two rounds. It was the fifth under par round of the year for the first-year freshman.

Ben Martin, Clemson’s top player entering the event, had a 71 on Monday with two birdies and two bogeys. He is in 44th position at 147 after two rounds.

The final round will be played on Tuesday.