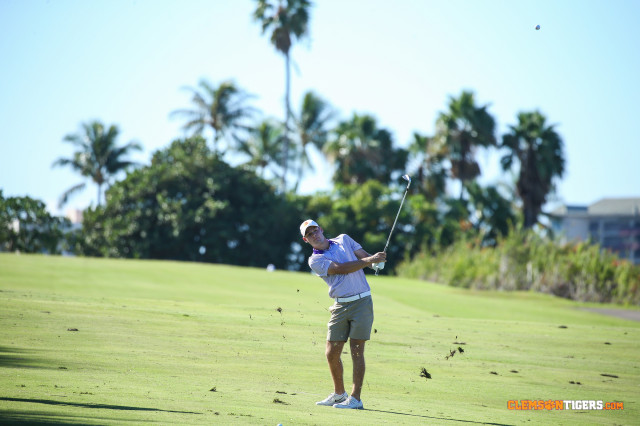 Clemson Tied for Second Entering Final Round at ACC Championship

New London, NC—Doc Redman and Turk Pettit each had rounds of three under par 69 on Saturday to lead Clemson to a 280 team score and a tie for second after two rounds of the Atlantic Coach Conference Men’s Golf Championship at The Old North State Club in New London, NC. The 12 teams will play the final round on the par 72 course on Sunday.

Clemson trails fifth-ranked Georgia Tech by six shots entering the final 18 holes. The Yellow Jackets are at 553, 23-under-par after 36 holes, while Clemson is tied with an upstart Notre Dame team at 559. Notre Dame was not ranked in the top 50 entering the tournament, but has shot 16-under-par over the first two rounds to tie the Tigers.

Clemson and Notre Dame have a three shot lead over Duke and Virginia, who stand in a tie for fourth at 562. Duke had the top team round of the day with a 276. North Carolina is sixth at 563 and Wake Forest is seventh at 564.

“We can’t play like this if we are going to come back and win tomorrow,” said Head Coach Larry Penley, who has guided the Clemson program to nine ACC Tournament victories. “Everyone has been in the game and that is good to see.

“But, we are going to have to play a little bit better, make a few more putts by each player tomorrow. We are going to need a 14 or 15 under par round. We are capable of doing it, but we have to improve from what I have seen so far this weekend.”

Clemson last shot 15 under par (273) at the Old North State Club in the opening round in 2016, the last time Clemson won the ACC Championship.

Four Clemson players shot under par and the Tigers had a team score of 280, eight under par. Combined with an opening round 279, this is the first time Clemson has shot 280 or better in each of the first two rounds of the ACC Tournament since 2002.

Redman had another strong round with a three-under-par 69 thanks to four birdies and just one bogey. His 69 could have been a 65 as he missed four birdie putts from 10 feet or less. The 2017 US Amateur champion stands in third place with a 136 total.

Pettit also had a 69 on Saturday thanks to five birdies and just two bogeys. The freshman made a four-shot improvement over the first round and his 142 total stands in 24th place after 36 holes

Bryson Nimmer and Kyle Cottam both had rounds of one-under-par 71 on Saturday. Nimmer had a 69 in the first round and his 140 total through two rounds is 16th. Nimmer made four putts of 15 feet or more, including a 35-footer for birdie on the par three seventh hole. But his round did not end well as he made a bogey on the par five 18th. Cottam has played solid for 36 holes with consecutive rounds of 70 and 71 and he stands in 22nd place after two rounds.

Clemson will be in the final group with Georgia Tech and Notre Dame. The Tigers begin play at 10 a.m. off No. 1 on Sunday.