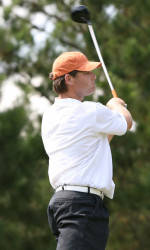 Clemson Tied for Second After First Round of Carpet Classic

CLEMSON, SC – Corbin Mills, McCuen Elmore and Jacob Burger all had under-par scores to lead Clemson to a one-under par team score of 287 and a second-place standing after the first round of the Carpet Classic in Dalton, GA. Clemson was the only team in the 12-team field with three players under par for the first round in the tournament that includes six top 20 teams.

Georgia Tech has the first round lead at 286, just one shot better than 16th ranked Clemson, who is tied for second with Chattanooga at 287. Georgia is fourth with a 289 score, while Auburn is fifth at 290 and Alabama, ranked third in the nation in the preseason, is sixth at 291, four shots in back of Clemson.

Elmore and Mills both had rounds of two-under par 70 and stand in fourth place for the first 18 holes of the season. They trail individual leader Stephan Jaeger of Chattanooga by two shots. Mills had three birdies on the back side, but bogeyed the 18th hole, while Elmore had four birdies and two bogeys for the round.

Burger, like Elmore a senior, had four birdies and three bogeys in shooting his one under par score of 71, his 16th straight round of 74 or better dating back to last year. Burger is tied for 10th.

Billy Kennerly shot a counting score in his first round of college golf with a four over par 76. He was one under par through 11 holes, but then shot five-over on the last seven holes. Thomas Bradshaw was the non-counter with a 79. He had three double bogeys over his first nine holes.

The Tournament continues on Saturday with the final round on Sunday at The Farm, a par 72 course in Dalton, GA.