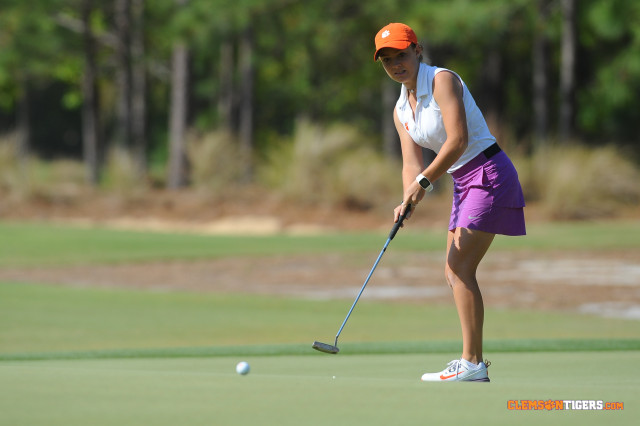 Clemson, S.C.—Alice Hewson, Sydney Legacy and Kennedy Swann all shot rounds of one-under par to lead Clemson to a 285 team score and a tie for fourth place after the first round of the NCAA Tallahassee Regional in Tallahassee, Fla..    The 18 teams in the field are fighting for a top six finish that will advance them to the NCAA Championship tournament in Stillwater, Okla. May 18-23.

Clemson was four-over-par as a team through the first nine holes and stood in 12th place. But, Kelley Hester’s team played the back nine in seven-under, including six under as a team on the last five holes, to jump eighth places in the standings.

Washington has the team lead after one round with a 15-under-par score of 273, while Furman is second at 280. Alabama, ranked second in the nation by some rankings, shot a 282 and is third at six-under. Clemson is tied for fourth with Tennessee and Wake Forest. Host school Florida State is seventh at 286 and Georgia is eighth at 287.

“We got off to a slow start, but the girls stayed patient and made some putts on the back nine,” said Hester, the only coach in Division I women’s college golf history to take four different schools to the NCAA National Tournament.

Hewson and Legacy, who were both named All-ACC last week, both had four birdies and three bogeys on Monday. Hewson made bogey on two of her first three holes and was still two-over headed to the 14th hole. But the junior made birdie on three of her last five holes to finish with 71 shots on the par 72 course that is 6,342 yards in length.

Swann played the front nine at one over, then made birdies on holes 10, 11 and 14 and finished with her seventh under-par round of the year.   All three Clemson golfers that shot 71 are tied for 16th after the first round.

Ana Paula Valdes had a consistent round of 72 that included one bogey, one birdie and 16 pars. The sophomore from Mexico is tied for the individual lead in pars on the first day out of the 90 golfers in the field. Clemson had 64 pars as a team, more than any other team.   Graduate student Marisa Messana got off to a rough start with bogeys on three of her first four holes, but she played the last 14 holes at even par.

The second round continues Tuesday morning. Live scoring is available on golfstat.com.