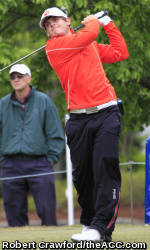 Clemson Tied for Fourth After First Round of NCAA Regional

BOWLING GREEN, KY – Clemson is one of four teams tied for fourth place after the first round of the NCAA Regional Golf Tournament at the Olde Stone Club in Bowling Green, KY. The Tigers fired a seven over par round of 295 on the par 72 course that is 7248 yards in length.

Clemson, the fourth seed in the tournament, is tied for fourth at seven over par after 18 holes with third-seeded Texas A&M, North Texas, and Memphis. ACC rival Virginia Tech is two shots back at of that group at 297, nine over par. UCLA has a 10 shot lead with a 284 score. Chattanooga and Colorado State are tied for second at 294. Second-seeded Arkansas is in 10th place at 14 over par 302.

The goal for Clemson and all 14 teams in the field is to finish in the top five by the end of the three-day, 54-hole event Saturday afternoon. The top five move on to the NCAA National Tournament in Los Angeles, CA May 29- June 3.

Crawford Reeves was Clemson’s top golfer on Thursday with a one over par score of 73. It was a balanced performance for the Tigers, but no one scored par or better. Corbin Mills, Thomas Bradshaw and McCuen Elmore all had rounds of 74. Freshman Billy Kennerly, playing in his first NCAA Tournament round, had a 75.

“We need to hit more fairways in the last two rounds,” said Clemson Head Coach Larry Penley. “This course really is tough if you don’t find the fairway because the rough is thick.

“But we had some good signs today. No one had a big number (double bogey) and we had everyone in the ball game. That is important in this tournament.

“We need someone to shoot under par. It is out there. Our guys are certainly capable of going low here. We just need to go out and do it.”

Thursday was the first time Clemson has not had a player shoot under par in the last nine team rounds. The five Clemson golfers had 30 bogeys, 18 birdies and an eagle.

Reeves had the only eagle by a Tiger with a three on the par five 18th hole, his ninth hole of the day. The junior from Greenville hit a six iron, 205 yards to within three feet of the pin. He then made the putt for his team best fifth eagle of the year.

“That shot did get my round going,” said Reeves. “I was three over at that point, but didn’t feel like I was hitting it that poorly. I just needed some putts to drop.” Reeves then made a birdie on the par five second hole when he hit his third shot from 100 yards within three feet. That got him to even par. He made a bogey when he missed a short putt on the eighth hole, his 17th hole of the day.

Reeves had a wild round with four birdies, an eagle and seven bogeys. He had a stretch of seven straight holes without a par on the back side, a streak that continued with his eagle on the 18th hole, his ninth hole of the day.

Junior All-America candidate Corbin Mills fired a two over par 74. It continued an unusual pattern for Mills, who has now failed to break par in the first round in eight of his last nine tournaments (including the Masters and the Heritage on the PGA Tour). But, he has a 68.63 average in his final rounds as a college player this year, second best in the nation. Mills had four bogeys and two birdies, including a three on the par four ninth hole, his final hole of the day.

Thomas Bradshaw had a two over par 74 on Thursday. He had five birdies and seven bogeys. McCuen Elmore also had a 74 thanks to four birdies and six bogeys. He birdied three of the four par three holes and was three under par on the par five holes for the day. It was Elmore’s first round since shooting a 67 in the US Open local qualifier last week.

All three Tigers who shot rounds of 74 are tied for 18th in the field of 75 after the first round in the individual race.

Freshman Billy Kennerly had a three over par 75 in his first NCAA Tournament round. It was the first time this spring that Kennerly’s round did not count towards Clemson’s team score.

Clemson was the only team in the field to have all five of its players shoot 75 or better.

The Tigers will continue play in this tournament Friday morning. Results are available on golfstat.com.