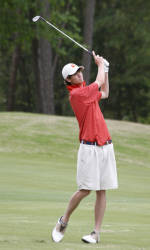 Clemson Tied for Fourth After First Round of Brickyard Invitational

Clemson, SC – Will Ovenden, Luke Hopkins and Jacob Burger all fired rounds of one-over-par 73 on Saturday to lead Clemson to a 293 team score and a fourth-place ranking after the first round of The Brickyard Invitational in Macon, GA.

Augusta State leads the field of 15 teams with a 282 team score, while Chattanooga and Virginia Commonwealth are tied for second at 291. Clemson, LSU and North Florida are all at 293. The tournament continues with 18 holes on Sunday and the final round on Monday at the par 72 Brickyard Golf Club course. Clemson was the top team among ACC squads. Florida State and Virginia Tech are tied for 8th at 296 and Georgia Tech is 12th at 298.

Clemson had its most balanced team performance of the early season. While Clemson did not place an individual in the top 20 after the first day, all five Tigers shot between 73 and 75 to keep the Tigers in the hunt after the first round.

The story of the day was Ovenden, who was playing in his first college round for the Tigers. After a slow start with bogeys on two of the first five holes, the freshman birdied the seventh and ninth holes to turn at even par. He shot one-over on the back nine with two bogeys and a birdie to finish with a 73.

Ben Martin, Clemson’s top player, shot a 74 in the first round. The senior from Greenwood had a 36 on the front nine and made a birdie on the 18th hole. But, a double bogey on the 15th hole hurt his round. It was the only double bogey by a Clemson golfer all day. Freshman Crawford Reeves had a 75 after five bogeys and two birdies.

Freshman Corbin Mills played as an individual in the tournament