Clemson Tied for 10th after First Round of NCAA National Tournament

Clemson, S.C. — Underclassmen Colby Patton, Kyle Cottam and Jacob Bridgeman continued their fine play in the NCAA Tournament on Friday, leading Clemson to a 10th place standing with a 302-team score after the first round of the NCAA National Tournament at The Blessings Golf Course in Fayetteville, Arkansas.

Oklahoma State, ranked number-one in the nation and defending National Champion, is first with a 290 team score. Stanford is second at 291, while Auburn and California are tied for third at 292. Texas A&M and Wake Forest are tied for fifth at 296 and Ohio State is seventh at 297. Texas is eighth at 298 and Georgia is ninth at 299, followed by Clemson and second-ranked Arizona State at 302. Southern California and North Carolina are tied for 12th at 304, while Liberty, South Carolina and Oklahoma are tied for 14th at 305.

Clemson is ahead of five top 10 teams after the first round, including Southern California (9th), Oklahoma (6th), Georgia Tech (7th), Vanderbilt (4th) and Duke (8th).

There are two cutlines to keep in mind going forward. After 54 holes on Sunday night the field will be cut from 30 teams to 15. After Monday’s fourth round the top eight teams will go into match play to determine the National Champion. Clemson is currently three shots ahead of the 15-team cutline and four strokes short of the eight-team cutline.

Patton continued his outstanding play with his 74 on Friday. He had a top 10 finish at the Austin (Texas) Regional 10 days ago thanks to rounds of 71-71-69. On Friday, the sophomore from Fountain Inn, S.C had four birdies, including consecutive birdies on holes six and seven after a double bogey on the fifth hole. He is in 29th place after the first round.

Cottam had a two-under-par 34 on the back nine, Clemson’s first nine of the day.  That included an eagle three on the par five 15th hole that jumped Clemson into a tie for fourth place at two-over-par at the time. Cottam shot a 40 on the front nine but showed his ability to hang in there after consecutive double bogeys on holes two and three that could have ruined his round. But he played the last six holes in one-under par to join Patton in 29th place individually. 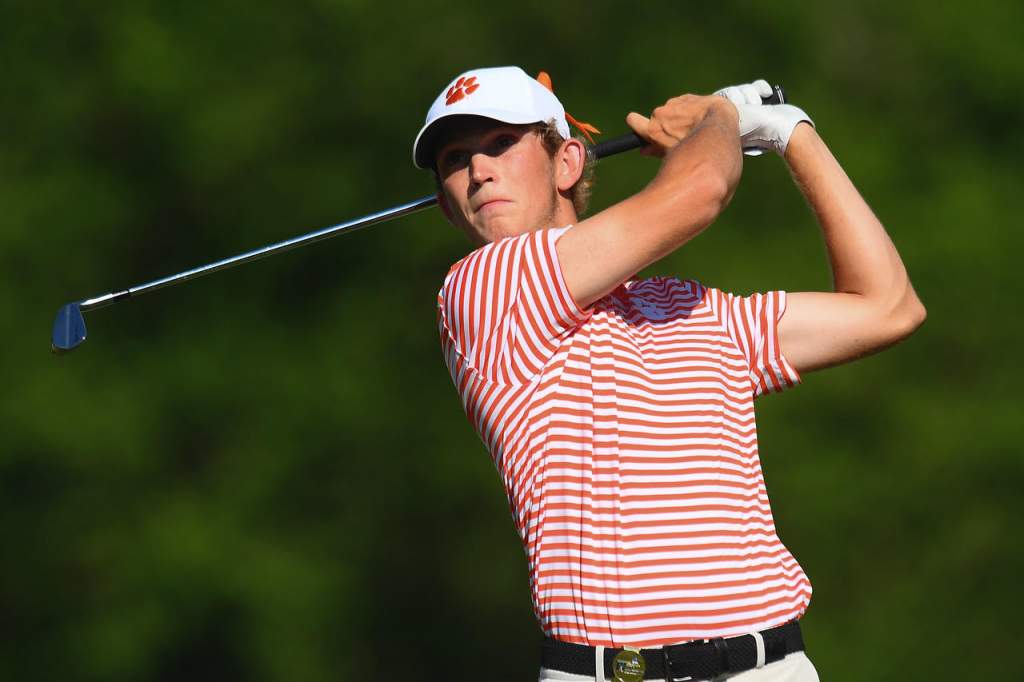 Bridgeman, a freshman also had four birdies on the way to his three-over-par 75, stands in 36th place.   Senior Bryson Nimmer, Clemson’s top player this year, struggled to a 79, his high round since an 81 in the first round of the 2016 NCAA national Tournament.  He uncharacteristically had a pair of double bogeys and had just one birdie.   Junior William Nottingham was the non-counter with a 12-over par 84.

While the Tigers are in good position, head coach Larry Penley was not pleased with his team’s performance. “We could have done much better,” said the Clemson head coach who is coaching in his 36th NCAA Tournament. “We had some poor execution and it led to nine double bogeys (including six from players who had counting scores). We also need everyone to be in the ball game. You can’t make the cut four-legged.

“I will say the conditions were tougher in the afternoon (Clemson played in the final grouping and did not leave the course until 8:30 p.m. local time.) Hopefully the conditions will be a little easier on Saturday morning.”

Clemson will sleep fast this evening as the Tigers have a 9:40 a.m. eastern tee time on Saturday.  For the second straight day Clemson will play with Georgia and BYU.