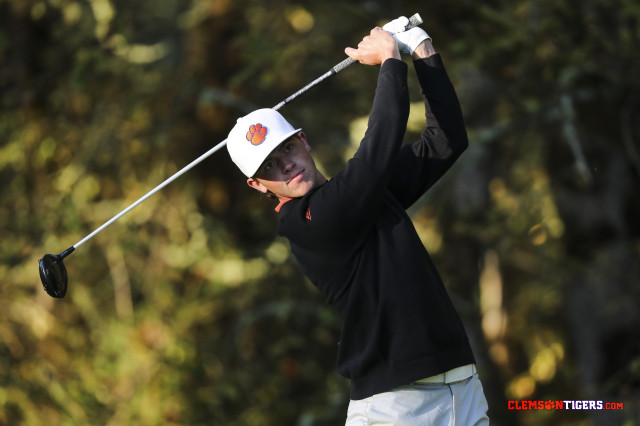 Clemson, S.C.—Turk Pettit shot a three under par 68 on Tuesday to lead Clemson to a 282 team score and a third place standing after two rounds of the Bandon Dunes Intercollegiate at Bandon Dunes Country Club in Bandon, Oregon.

Clemson has a 560 team score, tied for third with Washington State and Santa Clara. Arizona State has the lead at 551 and Utah is second at 556.

Pettit, who shot a 69 in the first round, had three birdies and no bogeys in the second round that saw him move into sixth place in the individual race.   It was his sixth round in the 60s this year.

Bryson Nimmer, who had a first round 66 that included eight birdies, had an even par 71 on the 6,633 yard course on Tuesday. He had three birdies and three bogeys on Tuesday and is in fifth place heading into the final round.

William Nottingham had the second best round of the day for Larry Penley’s Tigers with a one under par 70 thanks to four birdies and three bogeys.   The sophomore has a 142 total after two rounds, 21st best in the field.

Kyle Cottam had a 73 in the second round and has a 144 total after two rounds, while Colby Patton had a 75 on Tuesday and stands at 149 through two rounds.

Clemson is playing the tournament without All-American Doc Redman, who will play in the Arnold Palmer Invitational on the PGA Tour in Orlando this weekend.

Clemson has 44 birdies as a team through two rounds, most in the field.