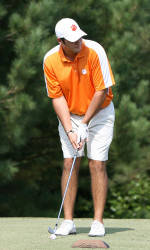 Clemson Third After First Round of ACC Tournament

CLEMSON, SC – Sophomore Corbin Mills fired a two-under par 70 and junior Jacob Burger had a one under par 71 to lead Clemson to a 290 team score and third-place standing after the first round of the Atlantic Coast Conference Tournament at The Old North State Club at Uwharrie Point, NC. The second round will be held on Saturday followed by the third and final round on Sunday.

Mills and Burger each had five birdies to tie for the most birdies among the 55 players.

Georgia Tech, ranked third in the nation entering the event, holds the lead with a seven under par 281 on Friday. Duke is second at 289, just one shot ahead of the Tigers 290 score. Wake Forest is fourth at 293 and Florida State is fifth at 294. Virginia and NC State are tied for sixth at 295.

The round was played in windy conditions with temperatures in the 50s. Mills, playing in his second career ACC Tournament, had a 34 on the front side with two birdies and seven pars. He shot even par on the back, but it was a wild ride with three birdies and three bogeys. He finished strong with a birdie on the par five 18th hole. Mills stands in fifth-place after the first round. It was his best career round at The Old North State Club after rounds of 74-72-77 as a freshman last year.

Burger, Clemson’s low stroke average player so far with a 73.38 figure for 24 rounds, had five birdies and four bogeys on Friday. He had back-to-back birdies on the 12th and 13th holes to highlight his round. His 71 is good enough for eighth-place in the individual race after 18 holes.

McCuen Elmore was Clemson’s third best player on Friday with a two over par 74. The junior had four birdies, including the 11th and 13th holes. He did bogey the 18th hole, but is still in 20th place after the his first career round at the ACC Tournament.

Sophomore Crawford Reeves had a 75 on Friday after carding three birdies and six bogeys. He did play even par the last five holes. Thomas Bradshaw, playing in his first career round at the ACC Tournament, had a 77. He birdied the first hole, but did not have a birdie the rest of the way. He played the last four holes in even par.

Clemson had played the Old North State Club in even par or better as a team in 13 of the last 15 rounds over five years, but the weather played a part in the higher scores for the day, as only one team was under par for the day.