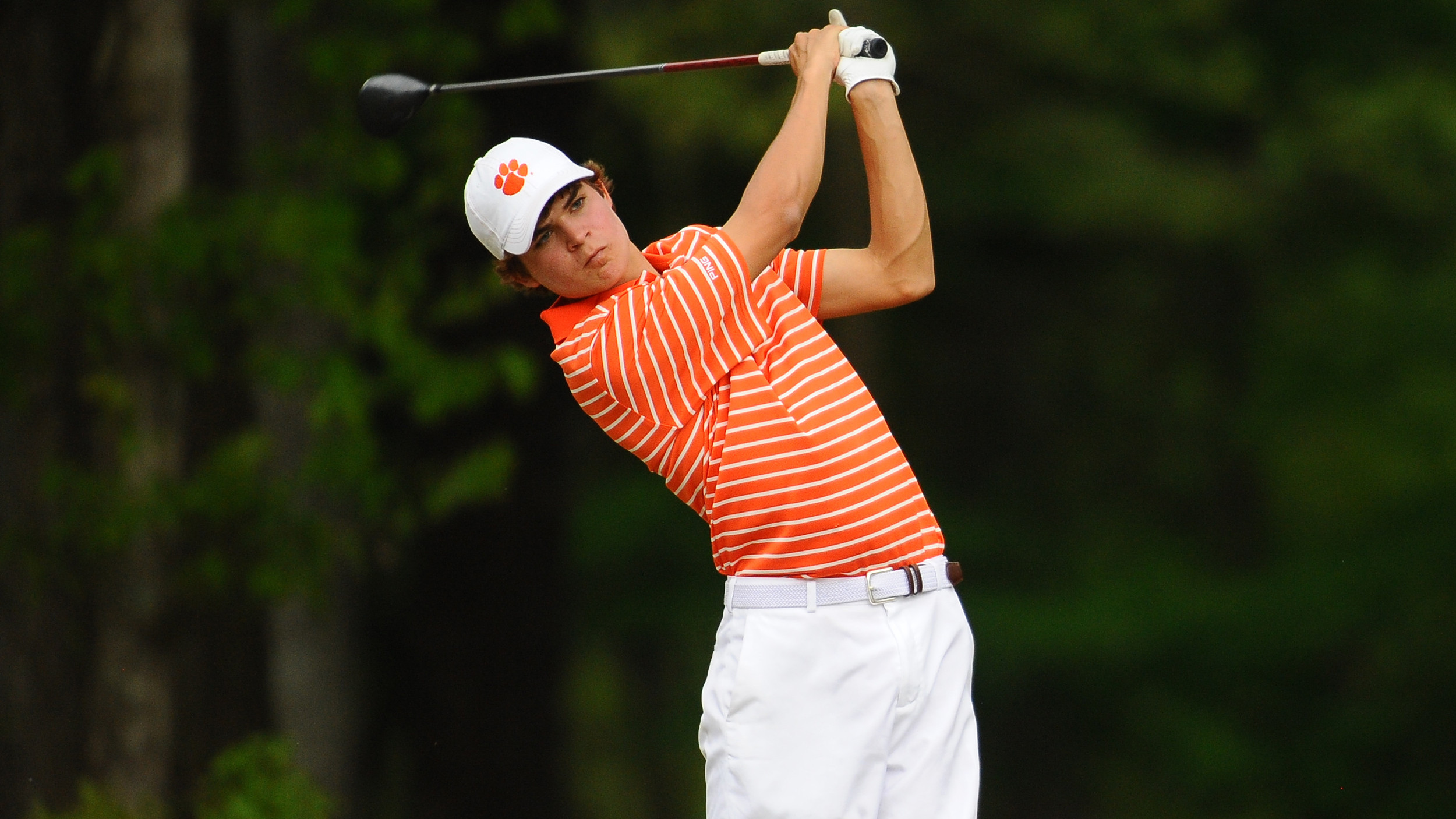 Clemson Third after Day One of NCAA Regional

SUGAR GROVE, Ill. – Freshman Carson Young fired an even par 72, one of just five rounds of par or better by the entire field, to lead Clemson to third-place standing after the first round of the NCAA Sugar Grove Regional at Rich Harvest Farms Golf Club in Sugar Grove, Ill.

The sixth seeded Tigers shot 299 as a team,  third best in the 14-team field and just seven shots behind top team UAB.  Illinois is in second place at 293.  After the Tigers stand Kent State at 301, Southern Cal at 302, Jacksonville State at 303 and California at 305.   California is the top seed in the field, while Southern California is seeded third.

The first day of the three-day event was played in 43-degree temperatures and intermittent rain for the first two hours.  The rain stopped after most of the teams had played nine holes, but the temperature never got into the 50s.

“It was among the coldest days of golf I can remember,” said Head Coach Larry Penley, who has taken Clemson to the NCAA Tournament all of his 31 years as head coach.  “I was proud of the way our team held together.  We got off to a rough start, but we made four birdies on the 16th hole (seventh hole of the day) and that got us in a good frame of mine.

“Before tomorrow we are going to go to a sporting goods store and get some hand-warmers and some turtle neck shirts.”

Clemson got off to a poor start and stood in 11th place at nine over par through four holes.  But, the Tigers played the rest of the day in just two over par and jumped eight spots to third place.

Young, who has been Clemson’s number four or five player most of the year, has come on of late, and shot his even par 72 thanks to three birdies and three bogeys. He stands in a tie for fourth place individually after 18 holes. Brian Campbell of Illinois has the lead with a three under par 69.  For Young, it was his third straight round of par or better, the first time he has done that this year.

He played the front side, his second nine of the day in one-under-par.  “I made a 10 foot putt for birdie on the 16th hole and that gave me some confidence,” said the freshman from Pendleton who grew up a Clemson golf fan.  “I have played in weather like this before, but these were difficult conditions.”

Austin Langdale, Cody Proveaux and Stephen Behr all followed with birdies on the 16th hole thanks to approach shots on the 191 yard hole to inside 10 feet each.  Behr hit his to four feet.

Proveaux was Clemson’s second best player with a round of 74 and stands in 11th place.  He had four birdies and six bogeys during his round, but he saved his best shot for the last hole.  His approach from 175 yards with a six-iron on the par four ninth hole came to rest 10 feet from the cup.  It was the best shot all day by a Clemson player.

Langdale had a rough stretch on the opening nine, making six bogeys in a seven hole stretch at one point, but he gathered himself thanks to a birdies on the par five second hole and the par five seventh to shoot one-under-par on the back and four over 76 for the day.

Stephen Behr, Clemson’s top player with a 72.26 stroke average for the year, had a five over par 77, but finished strong with a birdie on the seventh hole after consecutive hybrid shots and a wedge to the green that finished five feet from the pin.  Behr had a double on his first hole (10th) and a triple bogey on the par three third hole that kept him from an even par score.

Sophomore Miller Capps had a 79 thanks to a pair of double bogeys on his first nine and his score did not count towards Clemson’s team score.