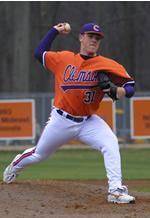 Clemson totaled 17 hits and four pitchers combined to allow just five hits in the Tigers’ 10-1 win in front of 2,986 fans at Doug Kingsmore Stadium Tuesday. The Tigers won their eighth game in nine outings to improve to 23-14, while the Catamounts dropped to 21-16. Earlier in the day, the two teams completed a game that was halted in Cullowhee on April 12. Clemson won that game 7-4.

P. J. Zocchi (1-0), making his first appearance in 2005, earned his first career win. The red-shirt freshman righthander got the start in his first action since recovering from Tomny John surgery, pitching 2.0 scoreless innings and giving up one hit. Chris Fidrych, Drew Fiorenza, and Chris Howard held Western Carolina to one run and four hits over the final seven innings. Starter Steven Strausbaugh (0-1) suffered the loss in his first start of the season.

Taylor Harbin had a big night at the plate for Clemson, going 3-for-4 with three RBIs, and Travis Storrer was 3-for-5 with an RBI. Brad Chalk, Tyler Colvin, and Andy D’Alessio also had two hits apiece. Thanks to the Tigers’ 17 hits, Clemson defeated Western Carolina for the 35th-straight time at Doug Kingsmore Stadium. Jared Greenwood was 2-for-4 for the Catamounts and scored their only run.

Clemson got on the board in the second inning. Storrer led off with a triple and scored on D’Alessio’s home run to left field, his seventh of the year.

The Tigers added to their lead in the fourth. Adrian Casanova was hit by a pitch to lead off the inning and moved to second on a sacrifice bunt by Herman Demmink. Chalk beat out an infield single, stole second, and scored along with Casanova on Harbin’s double down the left-field line.

In the sixth, Demmink singled, moved to second on a balk, and later scored on Harbin’s single to left.

Pinch-hitter Gene Pierce had an RBI single in the eighth, plating David Williams. Storrer then singled to right to score Jesse Ferguson. Tanner Leggett laced a single to right field that scored Pierce.

Greenwood singled and scored on Trey McDaniel’s sacrifice fly in the ninth. He was the only Catamount base runner that reached third base all night.

The Tigers return to action Wednesday at South Carolina at 7:00 PM. Freshman righthander David Kopp (2-3, 4.50 ERA) is scheduled to start on the mound for Clemson.