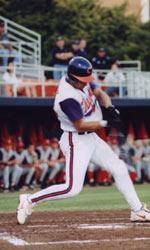 Clemson used a three-run sixth inning to take the lead and a four-run seventh to pad it on the way to an 10-2 win Sunday afternoon at Doug Kingsmore Stadium. The Tigers (27-2, 5-1 ACC) bounced back from their second loss of the season and dropped the Wolfpack to 21-13 (2-7 ACC).

After being shutout on Saturday, the Clemson offense finally broke through with a big sixth inning. Singles by Jeff Baker and Jarrod Schmidt reached on an error. Baker was thrown out at the plate on Jeff Hourigan’s grounder but Triplett singled in two runs to put his team ahead. Steve Pyzik’s sacrifice fly plated another run and gave Clemson a 4-2 advantage.

The Tigers added insurance runs in the bottom of the seventh. Greene singled and was followed by Baker’s 12th home run of the season, this one to right center. Johnson singled and he was driven in by Schmidt, who hit a towering home run to left field for his seventh homer for the year.

B.J. LaMura (3-0) earned his third straight win for Clemson. The righthander allowed two runs off seven hits while striking out six and walking three in 6.1 innings. Daniel Caldwell (5-4) picked up the loss for NC State.

NC State got on the board first in the third inning with a barrage of singles. After singles by Matt Butler and Dustin Murphy, Jeremy Dutton hit a grounder to the right side that was knocked down by a diving Russell Triplett, but allowed Butler to score. Brian Wright took the next pitch to right field to plate Murphy and give the Wolfpack a 2-0 lead.

Clemson answered with a run of its own in the third inning. L.J. DeMaino doubled to lead off the inning, advanced to second on a ground ball and scored on Khalil Greene’s ground out.

After the big sixth and seventh innings, Clemson capped the scoring in the eighth with RBI hits from Greene and Baker. The duo, along with Schmidt, each had three hits on the day to lead the offense.

Clemson will travel to Georgia to take on the Bulldogs Tuesday at 6:30 PM.