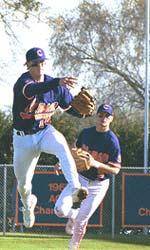 CLEMSON, SC – Freshman Tyler Lumsden shined in his first collegiate start and senior Khalil Greene notched three hits to lead top-ranked Clemson to a 4-0 win over third-ranked Wake Forest Sunday afternoon before 4,447 fans at Doug Kingsmore Stadium. The Tigers improved to 38-6 and 12-3 in the ACC while dropping the Demon Deacons to 36-8 and 15-5 in the ACC. Clemson took two of three games from Wake Forest and reclaimed first place in the ACC.

Lumsden (1-0) made the first start for a Clemson lefty since Thomas Boozer against Georgia Tech on April 22, 2001. The freshman threw 103 pitches over 7.1 innings, allowing no runs and four hits while strking out seven and walking four. Lumsden left the game in the eighth to a standing ovation from the Clemson crowd. Matt Henrie, who pitched 7.0 innings in Wednesday’s victory over South Carolina, pitched the last 1.2 innings to complete the shutout. Ryan Braun (1-1) got the loss for Wake Forest, which was shutout for the first time in 61 games. It was the Clemson pitching staff’s third shutout of 2002.

The Tigers scored a run in the opening inning for the second straight game. Kyle Frank ignited the offense with a double to left, his first hit of the series, and Greene followed with an infield single to extend his hitting streak to 10 games. Russell Triplett, David Slevin and an RBI-sinigle by Collin Mahoney extended the Tiger advantage to 2-0. In the bottom of the fifth, singles by Frank and Greene set the stage for Johnson’s RBI-single up the middle for a 3-0 lead.

Meanwhile, Lumsden kept the Wake Forest batters off balanced for most of the day. After walking the first batter of the game, Lumsden induced flyout and an inning-ending 6-4-3 double play. Lumsden and the Tiger defense did not allow a Demon Deacon to reach second base until two outs were recorded in the sixth inning. The freshman got out of the frame by striking out Stephen Ghutzman.

Wake Forest threatened again in the seventh with runners on first and second with one out, but the Demon Deacons grounded into their fourth double play of the game to end the inning. Clemson added an insurance run in the seventh when Greene singled, stole second and went home when catcher Ryder Mathias’ throw went wild and trickled off into right field. The hustling Greene slid into home plate just ahead of the throw to give his team a 4-0 lead.

Greene finished the day 3-4 and finished the series 7-10 to lead the offense. Frank, Triplett and Slevin also had two hits a piece for the Tigers.

The Tigers’ next action will be Saturday, May 4, at 7:00 PM against Georgia Tech in Atlanta. Clemson will not play any games during the week due to exams.