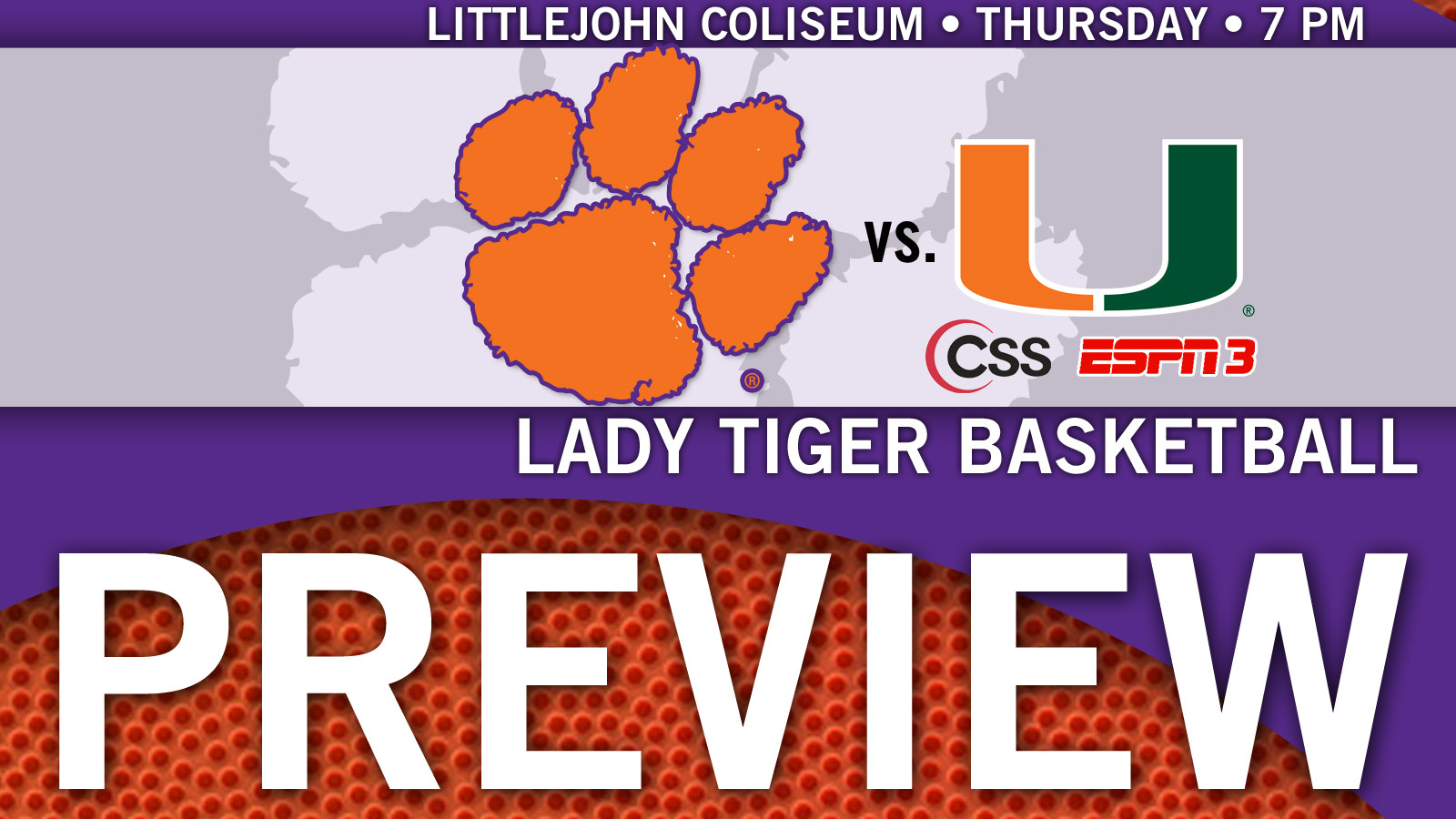 Clemson Takes on Miami on Thursday

CLEMSON, SC – The Clemson women’s basketball team (6-15, 2-8 ACC) will return home for a 7:00 pm contest against Miami (15-7, 6-5 ACC) on Thursday in Littlejohn Coliseum. The game has been designated as ‘Take a Kid to the Game’ Day, and all children 12 and under will receive free admission with a paying adult.

The game will be broadcast on CSS, and can be found on the web on ESPN3. Additionally, the game will air on WCCP (104.9 FM) in the upstate, and will have live stats available as well. Fans can also tune in and check live stats using the official ClemsonTigers app.

Miami holds a 6-5 all-time lead in the series, and has won three in a row. Clemson and Miami met last on Jan. 3, as the Hurricanes hit ten three-pointers and shot .415 in the game. Clemson actually hit for a higher percentage from the floor (.434) than did the Hurricanes, but turned the ball over eight more times. The Hurricanes pushed the pace to the tune of 17 fast break points.

Junior Quinyotta Pettaway scored 20 points on 10-16 shooting in what was the second-best outing of her career offensively, until going for 22 (8-13 FG, 6-9 FT) on Thursday at Florida State. Pettaway also added 10 rebounds against the 20th-ranked Seminoles in what was her 7th double-double of the season, and 11th of her career. The Hertford, NC native is now averaging 10.2 points and 9.2 rebounds per game, the latter mark ranking third among all ACC players. Pettaway enters the game with 491 career points.

Nikki Dixon continues to lead Clemson in scoring at 13.7 points per game, despite scoring just 12 points in the last two games. Dixon also leads the Tigers and ranks fourth in the ACC nabbing 2.5 steals per game.

Sophomore Kelly gramlich has also come on strong lately, hitting double-figures in four of the last five games off the bench, hitting 11 three-pointers during that stretch. Gramlich has scored 299 career points.

Miami is led by South Carolina native Morgan Stroman, who averages a team-high 12.8 points and 8.6 rebounds per game, and leads the team in blocks and steals.

After playing Miami, Clemson will go on the road for two in a row, playing at NC State on Sunday and at Maryland on Valentine’s Day. The Lady Tigers will return home on Feb. 17 when they take on Virginia Tech in the Play4Kay Pink Game.