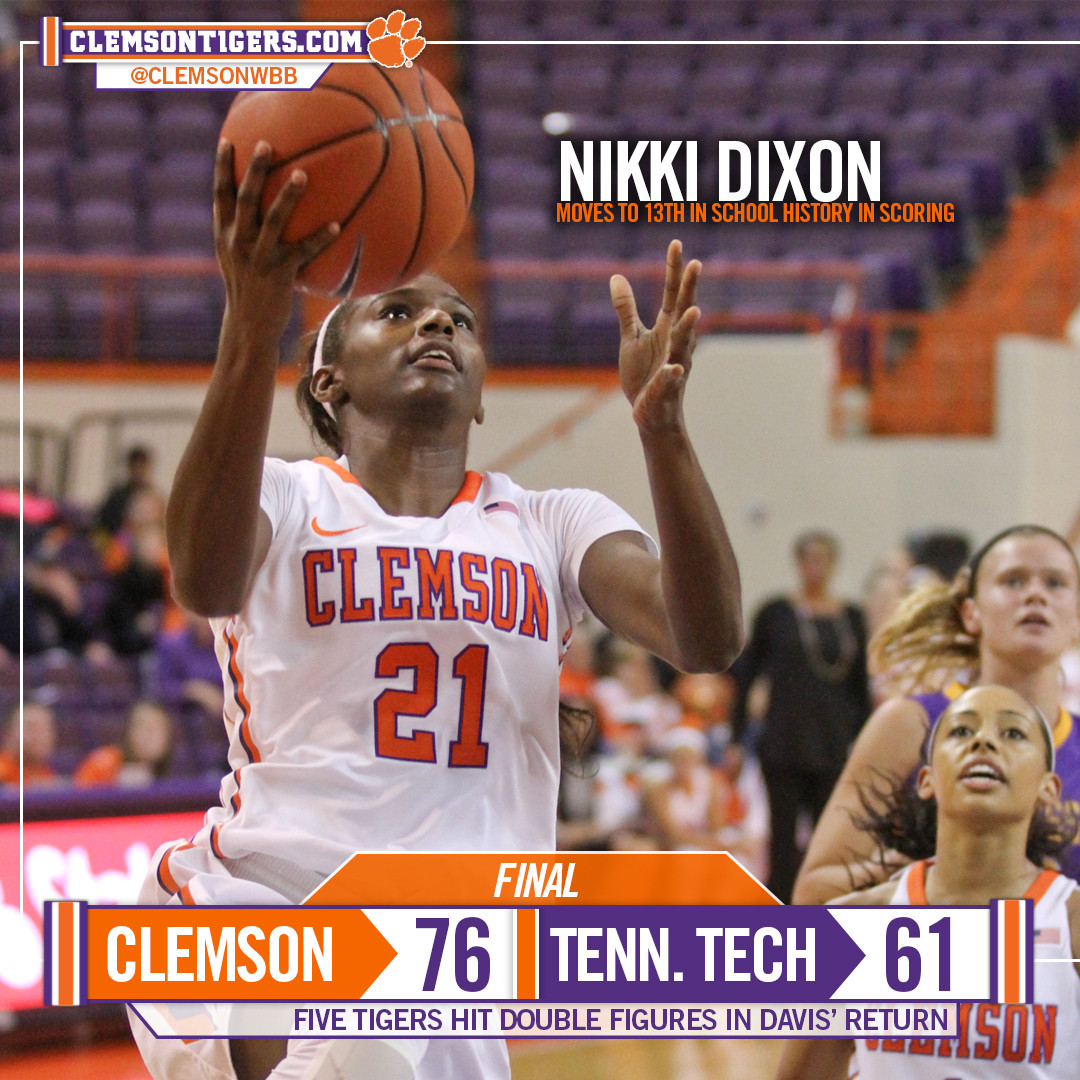 CLEMSON, S.C. – Nikki Dixon led five players in double-figures as Clemson (4-5) took down Jim Davis’ Tennessee Tech (1-6) club, 76-61, in Littlejohn Coliseum on Saturday. Clemson went on a 15-0 run inside the last five minutes and held TTU to 0-7 from the floor during the stretch to hold on for the win and snap a four-game losing streak.

Audra Smith presented Davis with a framed tie prior to the game on Alumni Night, recognizing the coach’s career Clemson’s head coach from 1987-2005.

Shelbie Davenport (11 points), Tiffany Lewis (11), Cha’nelle Perry (10) and Francesca Tagliapietra (10) each joined Dixon in double figures, and combined to go 7-14 (.500) from behind the arc. Perry also paced the Tigers with nine rebounds, and freshman MaKayla Johnson had five blocks, the most for any Tiger this season.

Clemson had 49 points total off the bench, 47 coming from the trio of Dixon, Lewis and Tagliapietra.

The Tigers also hit 20-23 (.870) from the line upping the season accuracy to .745, which ranks in the top-five in the conference. Clemson improved to 4-0 at home this season, and has tallied 76 or more points in all of those contests.

Senior point guard Chelsea Lindsay battled foul trouble most of the night, but came up with a few of the biggest momentum swings on consecutive possessions late in the game. With Clemson leading by two, she hit a pair of free throws, and after surrendering what would be TTU’s final field goal at the other end with 5:10 to play, she hit a jumper to put the Tigers up four again. On the next possession, she drove baseline and found Tagliapietra in the corner for a three that all but put the game away.

Clemson will break for finals before returning to action Saturday, Dec. 13, against North Dakota. It will be the second of six straight home games for the Tigers.

“The Lady Tigers effectively pressured the Tennessee Tech Golden Eagles into 17 turnovers and scored 23 points off of turnovers. Clemson successfully held the rebounding advantage 33-32 and controlled the boards throughout the contest.

The Lady Tigers were narrowly outscored in the paint 24-22, but made up the difference behind the arc, hitting eight three pointers in the game, the second highest total of the season. Finally, a total team effort secured the victory for the Clemson Lady Tigers as five different players scored in double figures.”

Three-year letterwinner and sharpshooter Kelly Gramlich, a graduate student, gives her take on the first half of Clemson’s 37-36 lead against Tennessee Tech

3-Pointers from the First Half:

Nikki Dixon took her 5th charge of the season and 33rd of her career.