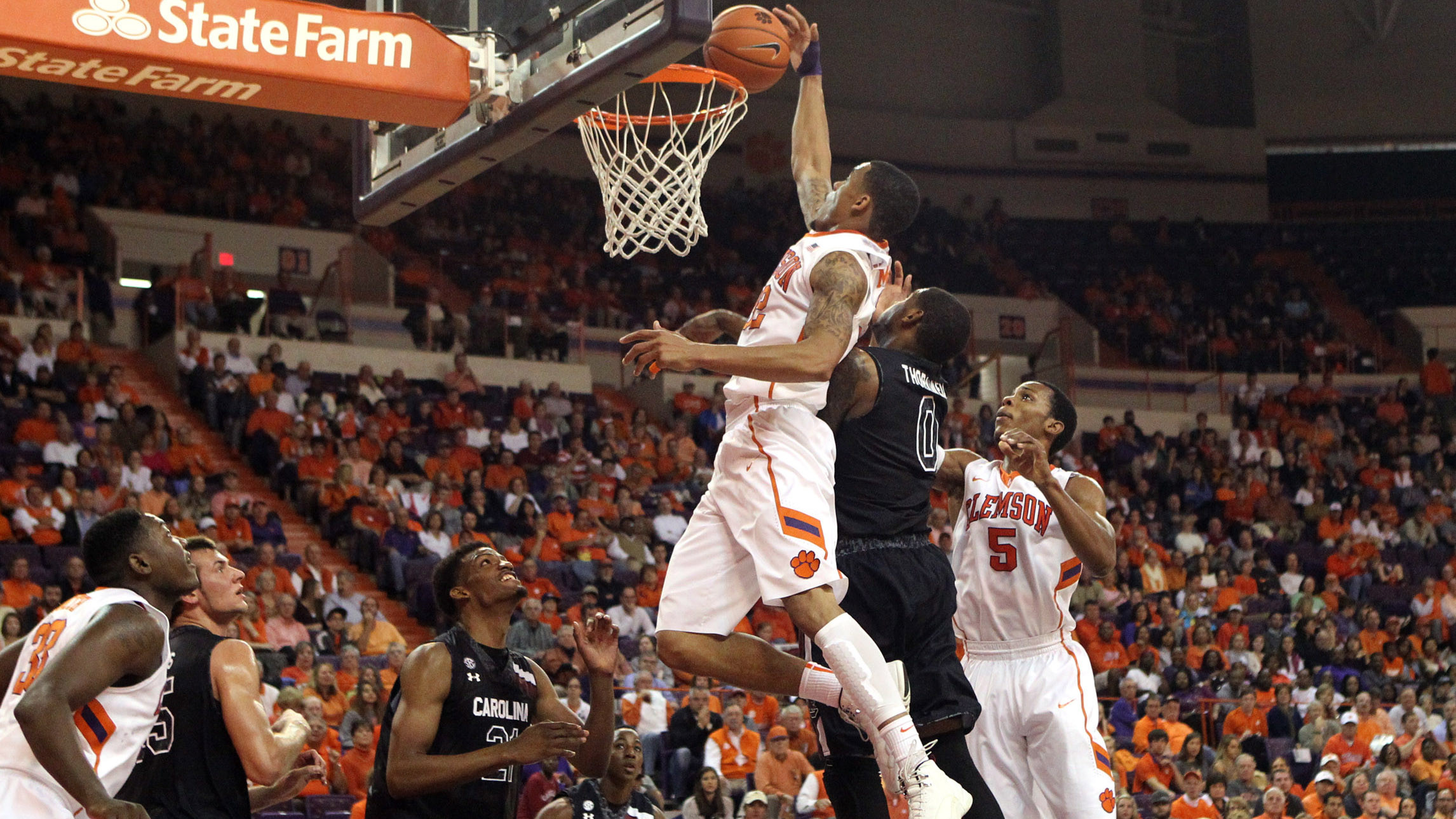 CLEMSON, SC – Junior forward K.J. McDaniels had his first career double-double and scored a game-high 21 points to lead Clemson to a 71-57 victory over archrival South Carolina at Littlejohn Coliseum on Sunday. The game was played before an announced crowd of 7,238. The win pushed Clemson’s record to 3-0 on the young season, while the loss dropped South Carolina to 1-2 overall.

McDaniels added seven blocked shots in one of the finest all-around performances in quite some time for the men’s basketball program. But he was not the only Tiger to make a difference for Brad Brownell‘s team Sunday. Point guards Jordan Roper (15) and Rod Hall (14) combined for 29 points, to pace a Tiger offense that shot 44 percent overall. More impressively, Clemson sank 24-of-26 at the free throw line – a school record given a minimum of 25 attempts.

South Carolina won the rebound battle, 41-33, and outscored the Tigers in the paint by a 40-26 margin. But the Gamecocks struggled shooting the ball, connecting on only one of 10 long-range attempts and 56 percent of their free throw attempts. Clemson also had a positive assist-to-turnover ratio (14-to-12), compared to a 7-to-13 ratio for Carolina.

Hall was aggressive early, scoring six quick points to push the Tigers to an 11-8 lead six minutes into the game. The margin grew to eight moments later as Adonis Filer and Roper buried corner three-pointers. The lead hovered around that margin until McDaniels came out of nowhere to follow a teammate’s miss with a one-handed tip dunk that made it 24-13 with under nine to play.

A six-minute Gamecock drought ended with fewer than four to play when Sindarius Thornwell buried a wing three. The next possession, he hit a runner to pull SC within eight at 26-18. Clemson drove the ball well in the final minutes and converted at the free throw line, making 12-of-14 in the half, to earn a 12-point cushion at one time. But Carolina’s Mindaugas Kacinas scored on a tip-in just before the buzzer to cut the lead to nine at 35-26.

The Gamecocks came out fast in the second frame, scoring the first six points to cut it to 35-32 before McDaniels scored on a driving layup and free throw. But SC continued in attack mode, cutting it to three on a Tyrone Johnson freebie to make it 40-37 with 14 to play. McDaniels brought the crowd to its feet on back-to-back possessions with a lob dunk over the top of the zone on one trip followed by a monster stuff on defense that led to a three-point play on the other end. The plays pushed the lead back to 45-39.

McDaniels kept pouring it on, scoring seven of 10 points for the Tigers as the lead ballooned back to double digits at 50-40 with 10 to play. Clemson stretched it to 14 on a long three by Ibrahim Djambo, his first in a Tiger uniform, with fewer than six to go. Clemson was steady in the waning moments to pull away to the win.

The Tigers take to the road this week to take part in the Charleston Classic in the lower part of the state. Clemson will take on Temple in the opening round on Thursday, Nov. 21 at 8 p.m.