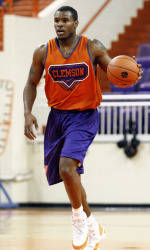 GREENSBORO, NC – Clemson was picked to finish third in the ACC this upcoming season in men’s basketball Sunday at the conference’s media day. This marks the third straight season the Tigers have been predicted to finish among the top five teams in the conference. It is the first time since the 1975-77 era that Clemson has been predicted to finish among the upper half of teams in the ACC three consecutive seasons.

North Carolina and Duke tied in the preseason poll, with the two rivals collecting 545 points apiece. The Tigers were third with 409 total points. Georgia Tech (387) was picked to finish fourth.

The Tigers are coming off back-to-back appearances in the NCAA Tournament, a first at Clemson since 1997-98. Clemson finished the 2008-09 season with a 23-9 overall record, the third straight year the Tigers surpassed the 20-win mark. The Tigers have improved their overall winning percentage five straight seasons as well.

The top returning player on the team is senior Trevor Booker, who on Sunday was voted to the preseason All-ACC team. Booker was a second-team selection last season when he led the ACC in rebounds per game (9.7) and field goal percentage (.571). Booker was named to the preseason all-conference squad Sunday, alongside Kyle Singler (Duke), Greivis Vasquez (Maryland), Ed Davis (North Carolina), and Malcolm Delaney (Virginia Tech). He was just one vote shy of a unanimous selection to the team.

The regular season tips off for Clemson on Friday, Nov. 13 against Presbyterian.