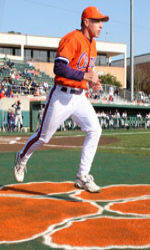 GREENSBORO, N.C. — The Clemson Tigers have been selected as the top pick for the 2006 Atlantic Coast Conference baseball season, as determined by a vote of the league’s 12 head coaches. Clemson received eight first-place votes and a total of 139 points in balloting. The Tigers recorded a 43-23 record a year ago and came within one game of the College World Series.

Georgia Tech was picked to finish second in the conference, receiving two first-place votes and 128 total points. The Yellow Jackets, the defending ACC Champions, return eight starters in the field and eight of their top 10 pitchers from last year’s squad that went 45-19 and advanced to the NCAA Super Regionals.

North Carolina is the coaches’ pick to finish third, having received two first-place votes and 126 points. The Tar Heels, who posted a 41-19-1 record last season, return 19 letterwinners for the 2006 campaign.