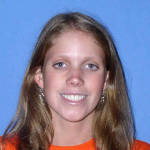 Moxie was a pre-business major who had just completed her first week as a Clemson student. She was on the roster for the 2007-08 Clemson swimming team as a middle distance swimmer. “We are deeply saddened by this sudden loss of a new member of the Clemson family, who already had significant ties to Clemson and many friends on campus and in the Upstate community,” said Dean of Students Joy Smith. “Our sympathy and prayers are with her family and friends.”

“Our heart goes out to the Moxie family,” said Clemson Swimming and Diving Coach Christopher Ip. “Amy was so eager to come to Clemson and was looking forward to the start of practice. That is what she was doing today, jogging on her own in preparation for the beginning of practice.

“She is from a Clemson family through and through. Her sister is a sophomore nursing major. She grew up wanting to be a Clemson Tiger and she was passionate about being a part of our program.

“Everyone in our swimming program is saddened by her loss and we will give the Moxie family our total support in this difficult time.”

Information about funeral arrangements and a campus memorial service will be announced when details are available.