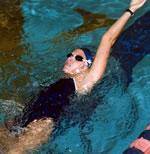 CLEMSON, SC – The Clemson men’s and women’s swimming and diving teams will travel to Chapel Hill, NC on Sunday to face the 22nd-ranked North Carolina men’s team and the 15th-ranked North Carolina women’s team. The meet, which is scheduled to begin at 1:00 p.m., will be held at the Maurice J. Koury Natatorium on the Tar Heels’ campus.

The Tiger men’s team is 11-2 overall and 2-1 in the Atlantic Coast Conference, most recently defeating Davidson and James Madison in a double-dual meet at Davidson. Clemson won eight out of the 13 events contested at the meet, with sophomore Marsh Lindley placing first in both the one and three-meter diving competitions to lead the Tigers.

The Clemson women’s team holds a 9-3 overall record and is 0-2 in the ACC, after posting wins over Davidson and Richmond at Davidson last weekend. The Tigers took first place in eight events and were led by senior Lindsey Kroeger and sophomore Kim Routh, who won two events apiece at the meet.

The Tiger men are 5-39 all-time against the Tar Heels, with North Carolina winning last year’s meeting between the teams by a score of 193-108. This season, the Tar Heel men’s team is 4-3 overall, most recently defeating Penn State and falling to Harvard at home.

Clemson’s women are 5-20 in the series against North Carolina. Last season, the Tar Heels defeated the Tigers by a score of 214.5-85.5. The North Carolina women’s team holds a 4-2 record this season, after falling to 15th-ranked Penn State last weekend in Chapel Hill.