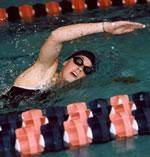 CLEMSON, SC – The Clemson men’s and women’s swimming and diving teams will travel to Davidson, NC on Saturday, Jan. 10 to compete in a double-dual meet. The Tiger men’s team will take on Davidson and James Madison, while the women’s team will face Davidson and Richmond at the meet to be held at Davidson’s Cannon Natatorium at 1:00 p.m.

The Tiger men’s team is 9-2 overall and 2-1 in the Atlantic Coast Conference so far this season. The team most recently defeated Denver, Florida Atlantic and Utah in a triple-dual meet held in Boca Raton, FL on Dec. 20. Clemson was led by Brent Hitchcock, who won the 100 and 200 free at the meet. Ryan Cassella and Mark Henly placed first in the 200 breast and 200 back, respectively, for the Tigers.

Clemson’s women’s team has a 7-3 overall record (0-2 ACC) on the season, also defeating Denver, Florida Atlantic and Utah on Dec. 20. Four different Tigers won events to lead the team at the triple-dual meet. Christine Anseeuw took first place in the 100 free, while Kim Routh finished first in the 500 free. Kim Cober won the 1000 free and Ashley Shafer placed first in the 200 breast for Clemson.

The Clemson men’s team is 5-12 overall against Davidson. The Wildcats won 12 of the first 16 meetings between the two teams, which were all contested between 1954 and 1971. The Tigers won the most recent meeting between the teams by a score of 203-38 in Clemson during the 1995-96 season. This season, the Wildcats are 1-3 overall, most recently finishing fourth (267 points) out of six teams at the New Year’s Invitational hosted by Florida Atlantic.

Against James Madison, the Tiger men hold a 2-0 series advantage, most recently defeating the Dukes by a score of 154-86 in a meet held in Miami, FL in 1997. James Madison is 5-1 on the season, and is coming off a first-place finish (509 points) at the New Year’s Invitational last weekend in Boca Raton, FL.

The Tiger women’s team is 1-0 against Davidson, defeating the Wildcats by a score of 186-52 at home in 1995. Davidson has a 2-2 overall record this season, and recently placed third out of six teams at the New Year’s Invitational, scoring 381.50 points for the meet.

Clemson is 1-0 all-time against Richmond in women’s swimming and diving with the Tigers defeating the Spiders by a score of 81-56 on the road in 1981. This season the Spiders are 2-2 overall and recently finished second with 855.50 points behind 20th-ranked Maryland at the Terrapin Invitational.