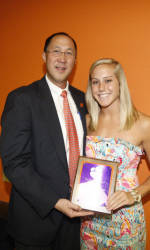 CLEMSON, SC – On Saturday, April 9, the Clemson men’s and women’s swimming and diving teams handed out several team awards and announced next season’s captains during their annual end-of-season banquet in the Banks McFadden Building. The list of honored athletes is as follows.