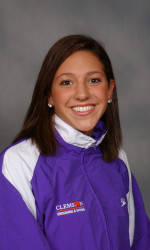 Chapel Hill, NC- Both the Clemson Men’s and Women’s Swimming and Diving teams remained in third place after day two of the Nike Cup from Koury Natatorium in Chapel Hill, NC, Friday night. The Lady Tigers have accumulated 450 points through two days, trailing only Florida State (639), and North Carolina (469.5). The men, looking to defend their title from a year ago have scored 440 points, and are only behind Florida State (770), and Kentucky (463).

Michelle Parkhurst, Alexandra Barsanti, Sarah Cefalu, and Rachel Regone started off the Friday night session by taking fourth place in the 200 medley relay. They came in with a season best time of 1:44.32 in the event. The Lady Tiger’s team of Michelle Parkhurst recorded a career best time of 1:49.08 during the preliminary heats of the 200 freestyle for an NCAA Provisional Qualifying time. This was the fifth best time in Clemson history in the event. Parkhurst (1:49.19) went on to win the 200 free, while fellow sophomores Alexandra Barsanti was the top Lady Tiger in the 100 breaststroke as she finished fourth, and swam a career best time of 1:03.67 during the preliminary heats. Barsanti’s time was the third fastest ever by a Lady Tiger. Parkhurst then captured her second win of the evening, as she posted a season best time of 55.61 in the 100 backstroke. Ashley Clay (57.49) finished sixth for the Lady Tigers in the event. In the final event of the night session, the 800 freestyle relay, the all sophomore team of LaRussa, T. Kroll, Regone, and Parkhurst touched the wall in fourth place with a time of 7:30.37.

On the men’s side, the 200 medley relay of Jay Crout, Attila Ruszka, Jason Chatlosh, and Mark Vahle got things going with a fourth place finish, touching the wall in 1:31.35. The team of Joel Johnson, Andy Bergren, Stewe Fekete, and Stephen Russell placed seventh. Freshman Matt Angelini (4:01.28) placed third in the 400 IM for Clemson, and was backed up by a ninth-place finish from Attila Ruszka (56.57) finished fifth, Joel Johnson duplicated his time of 50.53 during the preliminary heats to take fourth place in the 100 backstroke, and Jay Crout added a season best time of 50.93 for a ninth-place finish. In the 800 freestyle relay, the team of Mengering, Herrington, Russell, and MacLennan placed seventh with a time of 6:49.30.

Clemson will close out the Nike Cup as they return to action tomorrow at 10 am and 6 pm. Tomorrow’s events will include the 1650 freestyle, 200 backstroke, 100 freestyle, 200 breaststroke, 200 butterfly, three-meter diving, and 400 freestyle relay.