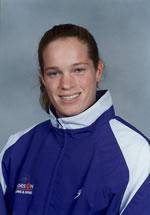 CLEMSON, SC – The Clemson swimming and diving team held its annual awards banquet on Wednesday, April 21 at the Tiger Den at Memorial Stadium in Clemson, SC. Ten different Tigers were honored with individual awards at the ceremony.

Mark Henly and Kim Routh claimed Most Valuable Performer honors, both earning the award for the second consecutive season. Henly earned Honorable Mention All-America honors in the 200m back at the 2004 NCAA Championships. He won his second consecutive ACC title in the 200 back this season and finished in the top-three in the 100 back and the 200 IM to earn All-ACC honors for the second year in a row. Routh was named an Honorable Mention All-American for her performance in the 1500m free at the 2004 NCAA Championships. She set a new Clemson record in the 1650 free (16:23.84) during the season, besting the previous record by over six seconds.

Buddy Reed and Kim Cober earned Most Improved Performer honors for the Tigers in 2004. Reed recorded three top-eight finishes at the 2004 ACC Championships, placing sixth in the 200 back and the 400 IM and seventh in the 200 IM. Reed and Cober were also honored with the Tigers’ Most Dedicated award. Cober represented the Tigers in the 400m and 1500m free at the NCAA Championships. She led Clemson at the conference meet with top-eight finishes in the 500 and 1650 free.

Eric Shulick and Aurelie Gresset claimed the Tiger Pride award for the 2004 season. Earning the Coaches Award were Tommy Rappold and Caitlin Bissell. Henly and Routh were honored for their Most Inspirational Performances during the season.