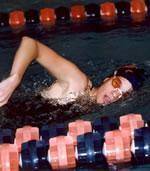 Clemson Swimming and Diving to Play Host to Duke, College of Charleston

Clemson, SC – The Clemson men’s and women’s swimming and diving teams will play host to combined dual meets against Duke and College of Charleston on Saturday at 1:00 p.m. at McHugh Natatorium.

Both Clemson teams enter the weekend with an 0-1 record, suffering losses at Florida State to open the season. The men’s team was defeated by a score of 129-112, with a Florida State victory in the match’s final event, the 200 freestyle relay, accounting for the deciding points. The Clemson women fell to the Seminoles by a score of 157-85.

The Clemson men are led by senior captains Tommy Rappold, Buddy Reed, and Eric Shulick. Rappold was victorious in the 100 fly with a time of 50.02 and in the 100 back with a time of 51.94. Reed won the 200 free (1:41.08) and finished second in the 100 free (46.82). Shulick, the defending ACC Champion in the one-meter diving competition, won the three-meter competition and finished second in the one-meter event.

Duke opens its season this weekend for both the men’s and women’s teams. The Blue Devils each finished last season with a 5-5 record. Clemson leads the all-time series against Duke, holding a 17-15 edge for the men’s teams and a 12-0 lead in women’s competition. The Tigers and Blue Devils last met during the 1991 season.

College of Charleston also opens its season this weekend. The Charleston men finished the 2003-2004 season with a 2-6 record while the women ended the season with a 2-9 record. Clemson leads the all-time series against the Cougars 4-0 in men’s competition and 5-1 in women’s meets. The two schools last met during the 2003-2004 season, with Clemson winning both meets with scores of 136-82 in the men’s meet and 143-87 in women’s competition.