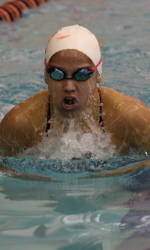 Clemson Swimming and Diving to Host Duke on Senior Day

CLEMSON, SC – The Clemson men and women’s swimming and diving teams will host ACC opponent Duke on Saturday, January 30 at 1:00 p.m. in McHugh Natatorium. This will be the final dual meet of the season for the Tigers and they will be honoring their seniors before the meet.

The Tigers have 14 seniors, four male and 10 female, that will be recognized on Saturday afternoon. Between these seniors, eight of them are in Clemson’s All-time top 10, eight have been named to the ACC Honor Roll and hold 10 school records.

Some races to watch may include the women’s 100 butterfly where Clemson’s Katrina Obas against Duke’s Emily Barber.

After this meet, the Tigers will prepare for the ACC Championships on February 17-20 in Chapel Hill, NC.