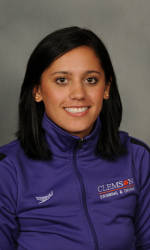 “This is what a rivalry is all about,” said Head Coach Christopher Ip. “This chance for us to have a great in-state meet in the middle of the season and it came down to the final event. It was a team effort and our coaching staff is really proud of this group. This is a big step towards our plan of `Building the Dream.’ It was a great win.”

Clemson started the meet off strong by winning both the 200 medley relays. The women’s team of Kelli Kyle, Katrina Obas, Thomas Recko, Chris Dart, Derek Barre, ad Eric Bruck finished with a time of 1:31.91 to claim the victory.

Sophomore Kelli Kyle then got a win for the Tigers in the 100 backstroke finishing at 56.54. Seniors Thomas Recko and Jason Chatlosh then tied for first in the 100 back on the men’s side with a time of 50.86.

The Tigers continued the winning in the next event as senior Katrina Obas took first in the 100 breaststroke and sophomore Maddie Tarantolo came in second for the women.

Freshman Eric Bruck then showed his speed when he won the men’s 50 free in a time of 20.43. Fellow freshman Marcus Elliot came in second and sophomore Myles Oliver made it a 1-2-3 sweep by taking third.

Senior Thomas Recko made it a clean sweep of the backstroke events by taking first in the 200 back with a time of 1:49.23. Freshman Andrew Abeysinghe and sophomore Chris Dart took second and third respectively.

Katrina Obas got her second individual victory of the day by winning the 200 breaststroke. Elizabeth Savage, Laura Browning and Carmen Groenewoud finished third, fourth and fifth.

Katrina Obas then earned her third individual victory on the day as she won the 200 IM and freshman Matt Angelini came in second. In diving, Clemson’s David Giambra took first in the one and three-meter boards as he earned a 317.93 on the one-meter and a 357.90 on the three-meter. Both of those scores are NCAA Zone qualifying.

As the final event approached, Clemson had a slight edge on both sides, but they needed wins to clinch victories. It was an exciting final event and both relays came down to the final touch. The women’s group of Heather Savage, Maddie Tarantolo and Tori Cervone were able to hold off the Gamecocks with a time of 3:27.12 just out touching South Carolina’s time of 3:27.75. The men’s group of Seth Broster, Myles Oliver, Chris Reinke and Lee Groseclose just edged out South Carolina with a time of 3:05.93, only .03 seconds ahead of the Gamecocks.

Clemson will have two weeks off before they head to Atlanta, GA for the Georgia Tech Invitational November 20-22.