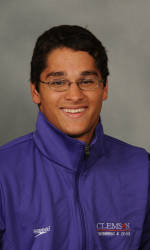 DAVIDSON, NC – Christopher Ip and the Clemson men’s and women’s swimming and diving teams defeated the Davidson Wildcats Saturday in Cannon Natatorium. The men took a 183-92 victory and the women won 177-123. The win gives the Tigers a 1-0 start to the season while Davidson fell to 0-1.

This win gave the men a 15-14 edge overall in the series and the women remained undefeated at 8-0 all-time against Davidson.

The Tiger men started their day off strong by taking the top three finishes in the 200 yard medley relay. The group of freshmen Andrew Abeysinghe and sophomores Chris Dart, Derek Barre and Myles Oliver took first in the event with a 1:35.34 mark.

Davidson took first for the women with the Tigers finishing second through fifth. Junior Sarah Smith and freshman Sarah Andrews went one-two for the women in the 1000 free, while David Gordon, Thomas Recko had a 1-2-3 finish for the men. Freshman Meg Anderson took the 200 free (1:55.10) to earn her first career victory and sophomore Seth Broster (1:45.42) won on the men’s side.

The Tigers then swept the 100 backstroke with sophomore Cara Lennon taking the win for the women and sophomore Heather Savage rounded out the top three for the women and Jason Chatlosh, Myles Oliver and Will Clark took the top four spots for the men.

Freshman David Gordon combined to go 1-2 for the men. Chris Dart won his third event on the day with his victory in the 50 freestyle touching at 21.40.

On the diving boards sophomore Patrick Chamberlain took the one and three-meters for the men.

Senior Mandy Snell won both the 200 breaststroke and the 200 IM for the Tigers, while Josef Knecht won the 100 fly.

The Tigers will return to action on Saturday, October 10 when they travel to Atlanta, GA to face ACC foes Georgia Tech and Miami (women) along with non-conference opponent Western Kentucky at 11:00 a.m.