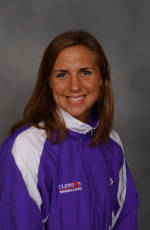 Columbia, SC – The Clemson Swimming and Diving teams went into the Carolina Natatorium and took two meets from the South Carolina Gamecocks Friday evening. The men were led to a narrow 150-148 victory with a strong performance by Attila Ruszka who collected three wins and a second place.

This improved their record to 4-2 (2-2 ACC) for the season. The Lady Tigers also pulled out a big win behind four first place finishes by Michelle Parkhurst, as they beat South Carolina 154-146. The women will be 3-4 (2-3 ACC) going into the half way point of their season.

Both teams will take two weeks off before heading to Chapel Hill, NC to compete in the Nike Cup Invitational, an event the men’s team won just a year ago. The women had similar success, as they finished third in 2005.