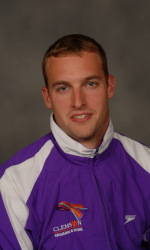 Clemson Swimming and Diving off to Solid Start at Nike Cup

CHAPEL HILL, N.C. – The men’s and women’s swimming and diving teams are representing Clemson at the Nike Cup Invitational at Koury Natatorium at North Carolina. After the first day, the men’s team sits in second with 261 points, while the women are in 3rd place with 236 points.

The Tigers got off to very fast starts in the morning session. In the preliminaries, junior Cassy LaRussa put up an NCAA B-Standard 4:53.46 in the 500 free. Freshman Sarah Smith swam the 500 in only 4:55.62 to place sixth in preliminaries, and then posted and NCAA-B cut 4:53.32 to finish fifth.

The men also got a terrific performance from a freshman in the 500 free, as David Gordon finished prelims in 4:31.17. Junior Dan Mengering had the sixth-best time in the morning. In the finals, Gordon took third with a 4:30.72 and Mengering took eighth (4:32.09).

In the 200 IM prelims, Attila Ruszka and Andy Bergren had the first and third best times, respectively. In the finals, Ruszka took first overall with a 1:50.51. Bergren took fourth with a 1:51.72, while sophomore Matt Angelini placed sixth to give the Tigers three of the top-six finishers. For the women, Katrina Obas took sixth (2:05.55).

In the 50 free on the women’s side, the Tigers were impressive. Two Tigers posted NCAA-B cuts in the prelims. Rachel Regone, Clemson’s school record-holder swam the event in only 22.78 seconds, 0.06 off of her record. In her win in the 50 free in the night session, Regone set a new Clemson record at 22.68. Junior Lauren Sindall had the fourth-best time, also with an NCAA B-cut. Her time of 23.19 moved her into fourth on Clemson’s all-time list. She then put up a 23.14 to re-set her career best. Junior Michelle Parkhurst (23.46) and Alex Allen (23.61) also came in the top-12 during preliminaries. Parkhurst took 8th overall, while Allen took 11th.

In the last prelim of the morning session, the men’s one-meter diving, sophomore David Giambra had a fourth-best 274.30. Marco Raye was ninth in 235.05. In the finals, Giambra placed fifth with a 283.95.

The night session started with the 200 free relay. The women’s group of Regone, Sindall, Allen, and Parkhurst set a Nike Cup record and NCAA B-cut 1:31.16. Ironically, all but Allen were on the Tigers 200 free relay group last season that set the pool record, 1:31.09, during the ACC Championships.

The men’s group of Vahle, Farnham, Russell, and Balderston came in second with an NCAA-B cut 1:20.44. Vahle’s leadoff split of 20.12 was an NCAA-B cut. The Tigers second group of Bryce Herrington, Eric Lane, Jay Crout, and Jason Chatlosh picked up seventh.

In the 400 medley relay, the women’s group of Parkhurst, Obas, Meggie Mizelle, and Regone took fourth. On the men’s side, the Tigers put up fourth and fifth place finishes.

Nike Cup action will continue on Friday morning. Real-time finishes and total results are available on tarheelblue.com. Nightly updates will be on clemsontigers.com.