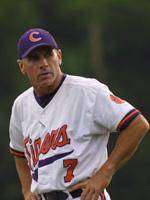 Robert Rohrbaugh (3-2) earned the win for the Tigers after giving up two earned runs through six innings pitched. He struck out seven. Patrick Hogan earned his ninth save of the year. Phillip Davidson fell to 4-2 on the year after giving up four earned runs and walking five over 4.1 innings.

Lou Santangelo led the Tiger offense with a 3-5 performance and three RBIs. He capped his solid afternoon with his 12th homer of the season, a solo shot in the eighth inning. David Hicks was the only Wolfpack player to have multiple hits. He was 2-5 on the day.

The Tigers threatened in the second. Clemson had the bases loaded with only one out. However, Zane Green chopped one to Davidson, who threw home to get the force on Andy D’Alessio. Jake Muyco then doubled up Green by throwing him out at first base.

N.C. State took a 1-0 lead in the third. With two out and two on, David Hicks singled through the right side to plate Muyco from second base. Clemson quickly came back. In the bottom of the frame, Lou Santangelo hit an RBI single to right field, scoring Brad McCann on a close play at the plate.

Clemson took its first lead in the fifth inning. Tony Sipp led off with an infield single, stole second, advanced to third on a groundout, then scored after Santangelo smacked his second RBI of the game. His hit through the left side gave the Tigers a 2-1 lead. McCann scored after Davidson walked D’Alessio with the bases loaded. Clemson extended the lead to 4-1 with a sacrifice fly from Triplett.

The Tigers got three more runs in the sixth. Sipp walked, then stole both second and third base. He scored on a wild pitch by Daniel Caldwell to give Clemson a 5-1 lead. Following a walk to Kris Harvey, third baseman McCann hammered a ball over the left field fence. The two-run shot, his 10th of the season, gave Clemson a 7-1 lead.

N.C. State scored five runs in the seventh. The Tigers booted two possible double-play balls. With the bases loaded, designated hitter Mike Jensen hit his second home run of the year, a grand slam to pull the Wolfpack within one run. Jensen’s homer was the first extra-base hit of the series for N.C. State. Sipp came on to relieve Jeff Hahn from his spot in centerfield. After allowing a double, Sipp got three fly outs to end the inning without further damage.

Clemson put another run on the board in the bottom of the frame. C.J. Gaddis came on as a pinch runner for D’Alessio. He stole second base on a failed pickoff attempt, then advanced to third on a groundout by John Ingram. Pinch hitter Ryan Hub drove in Gaddis with a sharply hit single to shortstop.

Clemson gets a rest this week for final exams. The Tigers return to action Saturday, May 1 for a three-game set with ACC foe Florida State. First pitch is scheduled for Saturday night at 7:00 PM.