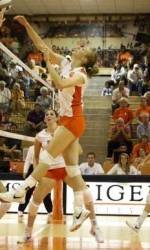 Didem Ege had 15 digs on the night, leaving her only two shy of the ACC career digs record of 2,238. Fellow Istanbul native Cansu Ozdemir had 13, as Clemson had 50 digs to Miami’s 33.

Clemson won their sixth match in their past seven outings, keeping NCAA tournament hopes alive, as Miami was ranked 50th in the RPI entering the match. Clemson’s holding Carico was no small task, as she exploded for 36 kills in a five-set match earlier in the season. Tonight, however, Clemson held the Hurricanes to 38 kills as a team.

Clemson jumped out to a 1-0 lead with a 25-20 win in the first set. Freshmen Natalie Patzin and Sandra Adeleye each had four kills in the set as the Tigers and Hurricanes exchanged blows early and often. Clemson came out quickly, taking a 12-6 edge early in the set. Miami fought back, coming within two at 12-10, and within one at 18-17 and 20-19. However, a Hoover timeout sent the Tigers on a 5-1 run to close out the set behind two Adeleye kills and a Patzin score.

The Tigers took a 2-0 set lead after hitting .273 in the second set and holding Miami to a .125 mark. Adeleye and Patzin again recorded four kills apiece to lead the Tigers, who recorded three blocks in the set. Kelsey Murphy added 13 assists to move past the 5,000 assist career milestone.

In the third set, Lia Proctor for the match-clinching kill and a 25-23 set victory.

Clemson returns to action on Nov. 20 and 21 against Virginia Tech and Virginia. The Tigers will play host to the Hokies at 7:00 pm, and the Saturday match with the Cavaliers is tentatively scheduled for 6:00pm.