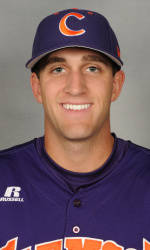 Starter Doug Kingsmore Stadium on Sunday. The Tigers, who swept the series 3-0, improved to 9-8 overall and 3-3 in the ACC. The Eagles, who lost their ninth game in a row, fell to 6-11 overall and 0-6 in ACC play.

Pohle (3-0) pitched a career-long 6.2 innings and tied his career high with five strikeouts against no walks to earn the win. The sophomore righthander also allowed seven hits and one run. Scott Firth pitched 2.1 scoreless innings to close out the game. Pohle, Joseph Moorefield, and Firth combined to allow only one of Boston College’s 13 baserunners to score.

Eagle starter Matt Alvarez (1-3) suffered the loss, as he gave up six hits, five runs, and two walks with three strikeouts in 3.0 innings pitched. Taylor Lasko and Nate Bayuk combined to pitch the final 5.0 innings without allowing a run, but Boston College fell four runs short and lost its seventh game in a row in the series against Clemson.

The Eagles took the game’s first lead in the first inning. Tom Bourdon hit the first pitch of the game to left-center for a double and moved to third on Blake Butera’s sacrifice bunt. Anthony Melchionda then singled up the middle to score Bourdon.

In the third inning, the Tigers scored five runs to take a four-run lead. Steve Wilkerson led off with a single through the right side and Jason Stolz was hit-by-pitch. Richie Shaffer followed with a single through the left side to plate Wilkerson. Two batters later, Brad Felder lined a one-out single to right field to score Stolz, then Spencer Kieboom walked to load the bases. Joe Costigan grounded a single up the middle to score Shaffer and Felder. Thomas Brittle reached on a fielder’s choice as Costigan was retired at second and Kieboom stayed on third. Tyler Slaton came through with a two-out single through the right side to plate Kieboom. It was Slaton’s first career hit.

In the ninth inning, pinch-hitter Matt McGovern led off with a single through the right side, then John Hennessy walked on four pitches. Bourdon grounded into a 1-6-3 double play, then Butera walked on five pitches. But Firth struck out Melchionda to end the game.

Wilkerson had a team-high two hits to lead Clemson, who had 10 hits (all singles) in the game. Eight other Tigers had one hit apiece, while Costigan had a game-high two RBIs. Stolz scored a run, but his 11-game hitting streak came to an end.

Bourdon went 3-for-5 with three doubles and a run to pace the Eagles, who had 11 hits.

Clemson will play a two-game, midweek series against Elon at two different sites. On Tuesday, the Phoenix will travel to Doug Kingsmore Stadium to take on the Tigers at 6:30 PM.