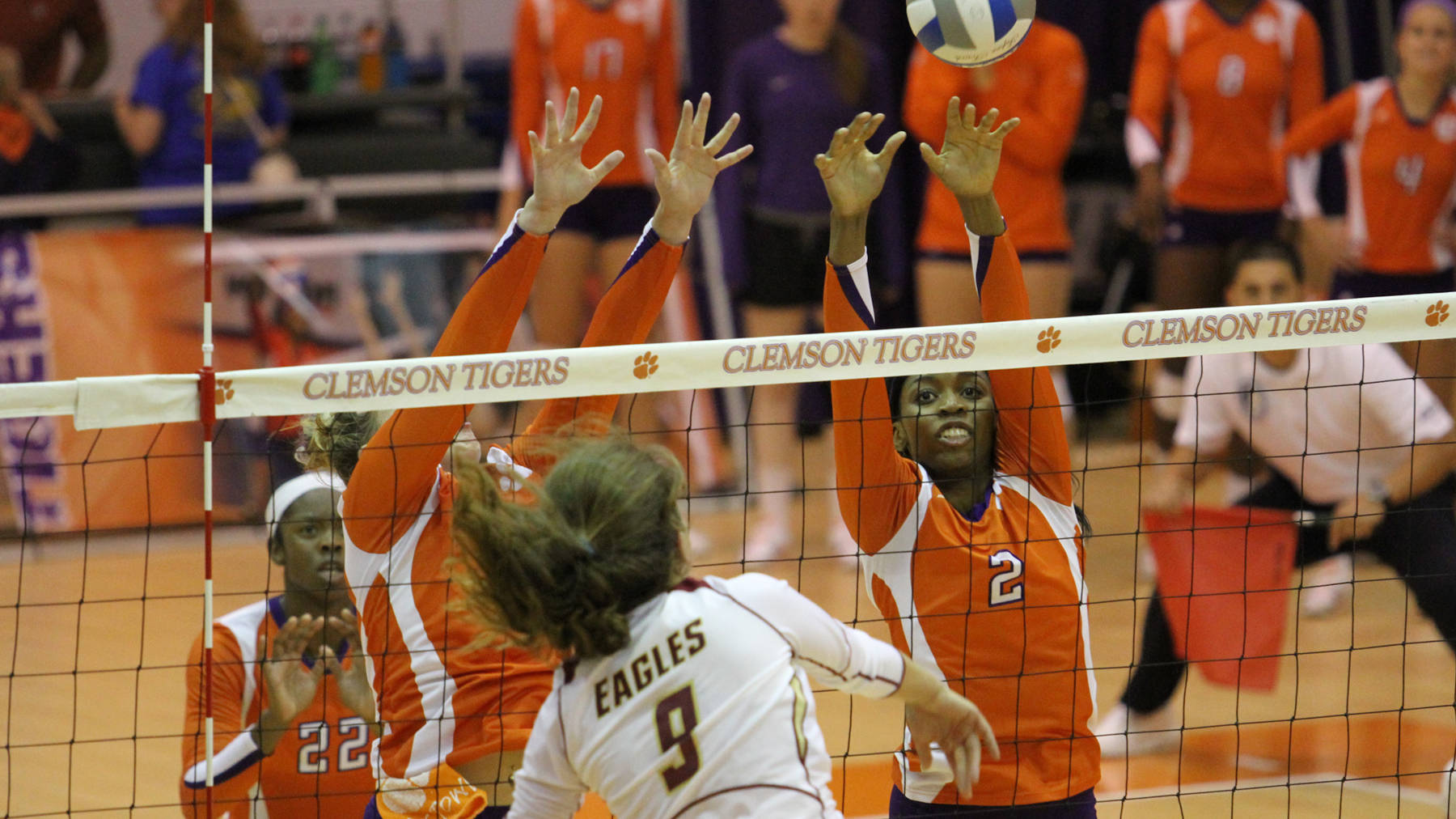 CLEMSON, SC – Thirteen was lucky for the volleyball team on Saturday night, as a trio of Tigers finished with 13 kills to lead Clemson past Boston College, 3-0 (25-21, 25-20, 25-17) in Jervey Gymnasium. Clemson (10-4, 1-2 ACC) extended their winning streak to ten over the Eagles (7-8, 1-2 ACC), and improved to 15-2 all-time in the series. Clemson hit .296 and registered 47 kills and had ten blocks, while holding the Eagles to .162 hitting, despite a match-high 17 kills from Katty Workman. Sandra Adeleye, Mo Simmons, and Kristin Faust each finished with 13 kills for the Tigers. The three did it in efficient fashion, combing for 39 kills against just ten errors in 78 swings. Simmons finished with a double-double, adding ten digs, and had a pair of service aces. Faust hit .522 (13k-1-e-23ta) in the match, a career-best mark for the sophomore. Junior setter Hannah Brenner played perhaps her best all-around match of the season, finishing with 39 assists, 15 digs, and three kills, including a key one late in the third set to help close out the match. She connected for kills on 47 percent of her set attempts as she spread the ball around. The Tigers also used a strong blocking night to stay on top of the BC hitters. Alexa Rand had five blocks, two of the solo variety, while Adeleye added four of her own. Clemson will get set to travel to North Carolina for a Wednesday showdown that will be televised live on ESPNU at 6:00 pm. They will then play NC State in Raleigh on Saturday. The first set was close throughout as both offenses were firing going back and forth to the tune of 14 ties and four lead changes. The Eagles took a late 20-18 lead before Brenner found Faust to side out, and Simmons served five straight to give Clemson a 24-20 lead. Adeleye had back-to-back solo blocks, and Simmons added a pair of aces during the run. In the second set, Clemson opened up a 20-16 lead after a Rand and Serenat Yaz block. The Eagles struck back with two in a row, but after a Jolene Jordan Hoover timeout, Clemson went on a 5-2 run, including three kills from Simmons to close out the set, 25-20. After BC took a 5-2 lead early in the third set, Clemson scored six of the next eight to take an 8-7 lead. Boston College responded with the next three, but Brenner found Faust and Simmons for a pair of kills each to get a 16-13 cushion. Leading 16-15, the Tigers then went on a 7-1 run to all but put the match out of reach. The Tigers closed out the match when Boston College was unable to return Brenner’s serve.