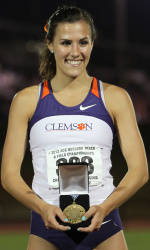 CLEMSON, SC – Clemson student-athletes posted a 2.99 GPA for the spring semester of 2012, the highest on record, according to data released by Clemson University’s Office of Institutional Research and Planning. Clemson’s 15 athletic programs had 228 student-athletes named to the academic honor roll, 111 on the Dean’s List and 43 on the President’s List (4.0).

“I want to congratulate Becky Bowman and her staff at Vickery Hall,” said Athletic Director Dr. Terry Don Phillips. “To set the all-time record in terms of GPA for our student-athletes is an outstanding accomplishment. I especially want to thank our coaches for collectively putting an emphasis on academics, and our student-athletes for their hard work in the classroom.”

The women’s swimming and diving program had a 3.62 for the semester, a team best and the second best on record for any Clemson athletic team. Twenty-four women’s swimmers and divers had at least a 3.0, including 17 who were on the Dean’s List. Two of the swimmers, Kerry McLaughlin and Maddie Tarantolo, were inducted into the Phi Beta Kappa Honor Society this year.

Men’s swimmer Seth Broster was on the academic honor roll and received an NCAA Post-graduate Scholarship this year.

The Clemson golf team had a 3.23 team GPA, its highest on record and the fifth best on record for any Clemson male athletic team. The Tigers had eight members on the academic honor roll, the most since the spring of 2003.

Other programs that posted a 3.0 or better in the spring semester were rowing, men’s soccer, women’s soccer, men’s tennis and women’s track and field.

Clemson’s football program had a 2.61 team GPA, just below the all-time record of 2.63 set in the spring of 2008. Thirty-four members of the team were named to the academic honor roll, including first-team AP All-American Sammy Watkins. The freshman receiver is the first Clemson football player to make first-team AP All-American and the academic honor roll in the same year since David Treadwell in 1987-88.

The women’s swimming and diving team’s 3.62 team GPA is topped only by a 3.64 by the women’s tennis program in the spring of 1995. Meg Anderson, Jenny Erickson, Emily Howard, Kerry McLaughlin, Rocky Raybon, Cassie Self, Sarah Smith and Maddie Tarantolo all were named to the President’s List.

Clemson’s top 20 rowing program had the most academic honor roll selections with 48, including 28 who made the Dean’s List. The rowing program had a 3.23 team GPA, the 27th time in the last 28 semesters the team has had at least a 3.0 GPA. All five members of the rowing team who made the All-South team (Kate Biladeau, Katie Bruggeling, Heather Cummings, Laura D’Urso and Giulia Longatti) were named to the academic honor roll.

The Clemson men’s basketball team posted a 2.69 team GPA for the semester, its best spring semester since 2007. Graduates Catalin Baciu, Bryan Narcisse and Andre Young all made the honor roll. The Lady Tigers had a 2.75 team GPA and five players were on the academic honor roll, including graduate Lindsey Mason, who had a 4.0.

Both soccer programs posted at least a 3.0 for the semester and 34 student-athletes made the honor roll, 16 from the men’s program and 18 from the women’s program.

The most successful program in the classroom and on the field of competition was the women’s track and field program. Coach Lawrence Johnson’s team is ranked fifth in the nation and has already won two ACC championships this year.