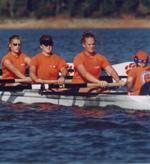 Clemson’s nearly 500 student-athletes had a collective GPA of 2.82 for the fall semester according to data released by the student-athlete enrichment office. The 2.82 overall GPA was the highest on record for a fall semester, and the third highest figure overall.

The volleyball team had a team record 3.19 GPA and 10 academic honor roll selections, tied for the second highest 3.0 students in that program’s history. The women’s soccer team was a fourth women’s sport over 3.15, as Todd Bramble’s team had a 3.16 for the fall semester and had 17 on the academic honor roll, the third straight semester with at least 17 selections. The men’s swimming and diving team posted a 3.12 for the semester, meaning both of Christopher Ip’s teams had at least a 3.0. That is the second straight semester both swimming programs have been over 3.0.

Jack Leggett’s baseball team had a 2.87 GPA for the semester, its best semester on record, breaking the previous best of 2.82. Eighteen members of that team, including co-captain Patrick Hogan, posted a 3.0 or better, tied for the second highest academic honor roll total on record. Clemson’s National Championship men’s golf team had four of its 10 student-athletes on the academic honor roll, including on-the-course All-American Gregg Jones, who made the Dean’s List.

Both track teams had solid semesters, as the women’s team had a 2.86 team GPA, while the men had a 2.81 figure. Both programs had exactly 23 academic honor roll selections, an all-time record for each program. Gisele Oliveira, an All-American on the track and recent ACC indoor champion, was one of the women’s track athletes on the honor roll. Jim Davis’s women’s basketball team had six Lady Tigers on the academic honor roll, its high total in seven semesters. Among the Lady Tigers on the academic honor roll were starters Julie Aderhold, Kanetra Queen and Amanda White. Its 2.67 team GPA was its best in seven semesters.