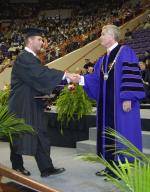 Fifty-seven student-athletes in 14 different sports graduated from Clemson University on Friday. The commencement exercises were held in two different ceremonies at Littlejohn Coliseum.

The Clemson rowing team and women’s swimming team had the most graduates with seven, while the women’s track and football teams had six representatives apiece.

Among the graduates were women’s basketball player Kanetra Queen and former women’s track athlete Jamine Moton. Queen, one of five Lady Tigers to graduate on Friday, was a starter for the Lady Tigers at point guard and earlier this year was a recipient of a Weaver-James-Corrigan Scholarship from the Atlantic Coast Conference. She earned her undergraduate degree in communication studies. Moton, who was named to he ACC 50-Year Anniversary teams in indoor track and outdoor track, earned a Master’s degree in Human Resource Development.

Clemson All-America golfers Matt Hendrix and Gregg Jones also graduated on Friday. Both are prime reasons Clemson’s golf team won the 2003 NCAA Championship last May. The Tigers are currently ranked second in the nation and will begin defense of that title in the NCAA Tournament starting May 20. Hendrix was finalist for the 2004 Ben Hogan Award and Jones earned All-ACC honors for the third time in his career last week.