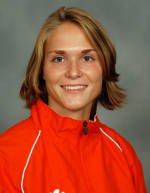 The first time Liane Weber heard of Clemson University, she was working with a hospital nursing staff in her native Germany. Weber, one year removed from high school and admittedly torn about what her future held, ultimately accepted a scholarship offer to come to the United States and compete for the track & field program at Clemson.

Nearly three years later, the move has proven to be beneficial for both parties. Weber is one of the top multi-event athletes in the NCAA, while the Clemson women’s track & field team is expected to be a factor in the competition for ACC titles in 2010.

While the transition from one culture to a completely different one may have been too strong a burden for some, it was one she took in stride. Though events came fast and furious, she had a unique and fortunate situation in that fellow German track & field athlete Linda Buchholz enrolled at the same time.

“The biggest difference was the language,” Weber said of her transition to the U.S. “It was tough to get used to that, but it was a great advantage to have Linda with me. We helped each other out with any issue.”

One place Weber did not have any noticeable issues was the track. After enrolling in January of 2007, she competed for Clemson at the ACC Championships in the school’s indoor facility a month later. Weber broke a school record and won the pentathlon, and she was subsequently named ACC Indoor Freshman-of-the-Year. She had an automatic NCAA qualifying total of 4,089 points and competed as the only freshman at the indoor national meet in March.

In the outdoor season, she was the ACC’s runner-up in the heptathlon and broke another school record in the multi-event competition. It was a phenomenal debut for Weber, but like any other student-athlete, she eventually had to deal with her share of adversity.

Following a tough sophomore season, Weber and her teammates were in for a big change. The men’s and women’s track & field programs were combined under the leadership of former Virginia Tech Associate Head Coach Lawrence Johnson.

“I knew he coached two German heptathletes (Gunild Kreb, Saskia Triesscheijn) at Virginia Tech,” said Weber. “I knew them and talked to them a lot, so I knew what to expect. You never really know how a different coaching approach will work with you, because athletes adapt differently. Coach Johnson’s approach has worked very well for me.”

That became obvious in the 2009 indoor season when she elevated her performance to another level. With Johnson’s help, she worked on the basics of sprinting, hurdling, and strength training. What resulted was a second indoor ACC pentathlon title in three years. She improved on her personal best and qualified for the NCAA Championships. In fact, she was second on the NCAA performance list in the pentathlon heading into the 2009 national meet.

Weber again established a personal best, this time with an ACC-record 4,235 points. She finished sixth at the meet and earned her first All-America honor. She was also the Southeast Region Indoor Athlete-of-the-Year, but she still was not satisfied.

“I was very confident coming into the meet,” explained Weber. “Finishing sixth was a little disappointing. It showed me the national level is extremely high.”

Following the indoor season, Johnson and his staff made the decision to red-shirt Weber and several other of the team’s standout performers. It was clearly an indication that Johnson believed the women’s program, with athletes like Patricia Mamona and April Sinkler also returning along with an outstanding recruiting class coming in, will have the capability to compete for conference championships in 2010.

In Johnson’s first year, the women improved five spots at the ACC Indoor Championships and placed third as a team. Weber believes the student-athletes that were red-shirted bought into the idea because of their belief in Johnson and his vision for the program.

“It was definitely a signal that we wanted to concentrate on building a strong team,” said Weber. “We’re going to have a great chance to perform well at ACCs, especially outdoors since the meet will be held here.”

Johnson has coached 17 All-Americans during his time as both an assistant and a head coach, and he firmly believes Weber possesses the tools necessary to win a national title. Weber, who has one indoor season and two outdoor seasons of eligibility remaining, admitted that winning an NCAA pentathlon or heptathlon crown remains her individual goal.

“It’s great to win ACC Championships,” stated Weber. “It’s a step in the right direction. For me, national championships are an even higher priority.”

Another priority at Clemson has been academics. A health science major who hopes to earn a second degree in chemistry, Weber should have multiple options when her time in Tigertown comes to an end.

No matter what her future may hold, a great deal of her career preparation can be attributed to the school she had never heard of just three years ago.

Philip Sikes is an Associate Sports Information Director in his sixth year at Clemson.