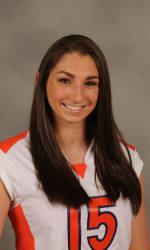 Kelsey Murphy is one of the Clemson volleyball team’s most valuable assets. A 6’0″ senior setter from New Lenox, IL, Murphy has more than proven her significance as a team leader during her Tiger career.

Murphy grew up around sports thanks to her athletic family. Her father played baseball in college, but her love of volleyball sprang up at an early age when her mother, another collegiate volleyball player, threw and hit volleyballs to her. Family noticeably plays an important role in Murphy’s life, both on and off the court.

Murphy cited her father as being her biggest influence on her volleyball career. “My dad has always been encouraging me, pushing me, and challenging me to do better. He helps me to work hard and is always there to support me.”

Although Murphy excels as the Tigers’ starting setter, she did not begin her volleyball career at that position. When she was younger, Murphy spent time playing middle hitter, although she admits it was only because she was one of the tallest players on her team. Murphy switched positions and began setting during high school, a change that has no doubt benefitted the Tigers.

Selecting Clemson to continue her volleyball career seemed to be a family affair as well as an easy choice for Murphy. “As soon as I arrived at Clemson, I knew this is where I wanted to be,” Murphy said, echoing the sentiments of many others who choose Clemson. “It’s beautiful here. I also love how it’s a big family.”

Another contribution to the family atmosphere is Murphy’s aunt Jenny Yurkanin, who was also a letterwinner for the Tiger volleyball program as a setter from 1987-90. This family connection has helped fuel Murphy’s achievements on the court. Murphy was aware of her aunt’s top-five standing for career set assists at Clemson.

“I just wanted to match her total,” she smiled. “I think I passed her.”

Indeed she did. Murphy surpassed Yurkanin’s mark of 3,690 set assists by totaling 3,859 in her first three seasons in Tigertown, moving up to third place in Clemson history in that category.

Team chemistry is important on any team, but Clemson’s volleyball team has become a family. “I like how volleyball is a team sport and how you always need the support of your teammates,” Murphy said. “We are such a tight-knit group and we get along on and off the court.”

As the team’s setter, Murphy is involved in nearly every play during a match. Her assists have undoubtedly helped improve Clemson’s offense by leading the team to a better hitting percentage.

“I have a big role on the team because I touch the ball on every play. Everybody works together. With six girls out there on the court, I do my part and everyone does there part so that it all works out.”

Throughout Murphy’s career at Clemson, she has proven herself to be an integral member of the volleyball team. As a freshman, she split playing time during the beginning of the season until she earned the full-time position for good in Clemson’s ACC home-opener against Miami (FL). She totaled 1,116 assists in 2006, second-most in school history for a freshman. Additionally, Murphy set a Clemson record for assists in a match by a freshman with 73 against Maryland. Those accolades helped earn Murphy a spot on the 2006 ACC All-Freshman team.

In 2007, Murphy’s sophomore year, she led the Tigers to one of their best seasons in recent history. She helped the squad to an ACC Championship as well as an NCAA Tournament berth. The team advanced to the second round of the NCAA Tourney before falling to UCLA. Individually, Murphy earned AVCA All-America Honorable Mention honors and was named First-Team All-ACC and All-East Region.

In 2008, Murphy continued to improve upon her career at Clemson and was named an AVCA Honorable Mention All-American as well as earning both First-Team All-ACC and All-East Region accolades for the second season in a row. The team also reached the second round of the NCAA Tournament at home for the second year in a row.

Not only has Murphy had a huge impact offensively, she has also contributed to the Tiger defense by scrambling for digs to keep plays alive while also using her height to shut down and block opponents’ attempted attacks. Exemplifying her effectiveness in several aspects on the court, she became the first player in school history to post a triple-double in digs, blocks, and assists in 2008.

Now in her senior year, Murphy has transitioned into a more vocal leader on and off the court and has taken on more responsibility.

“I’m there for support and to make sure everyone is doing what they’re supposed to be doing, which is to be focused and to work hard,” Murphy stated.

Murphy’s goals for her final season at Clemson include winning the ACC title and returning to the NCAA Tournament. Only a few matches into her senior season, Murphy has already begun her quest. She was named ACC Player-of-the-Week for the first time in her career thanks to her performance for the week ending on September 6.

If Murphy continues to lead the team in this way, her goals for the volleyball program are surely within reach.

Vickie Long, a senior from Bellbrook, OH, is a student assistant in the Clemson Sports Information Office.