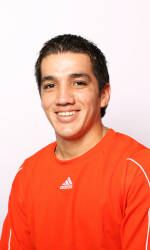 Clemson senior tennis player Carlos Alvarez has set big goals for the team and himself. With his level of determination, success will be in the future for Alvarez and his Tiger teammates this spring.

Alvarez is in his senior season at Clemson and has enjoyed a stellar career. In his three previous seasons, he won 66 singles matches and 46 doubles matches. He had an 8-3 record against ACC opponents in his freshman season and finished the year with a team-high 36 wins (36-10) in singles and a 23-15 record in doubles.

During his freshman campaign, he also played at #5 singles, and during his sophomore and junior seasons he played at #1 singles. He is expected to challenge for the #1 position again this season.

During his junior season, he reached a satisfying milestone, as he was named All-ACC on the hardcourt.

“I would love to have my best year and help the team reach our goals this season,” said Alvarez. “We want to go to the NCAAs as a team and finish in the top 20 of the rankings. As an individual, I want to go to the NCAA Singles Tournament and finish in the top 15 in singles. Through hard work, we can accomplish these goals as a team and me as an individual.”

“Carlos is an aggressive baseline player,” said Head Coach Chuck McCuen. “He has grown so much as a player and as a student during his career. We expect Carlos to have a great senior season.

“He has high goals for the team and for himself this season. With his work-ethic, talent, and desire, his goals are obtainable. He also has a wonderful attitude and that is very helpful in today’s world.”

Before arriving at Clemson, Alvarez was a successful junior player in his native Santa Cruz, Bolivia. He was the top-rated player in Bolivia in the under 12, 14, 16, and 18 age groups and was a Davis Cup player in both 2004 and 2006. He also had a world AP ranking of 1,350.

Alvarez arrived at Clemson in part because his cousin (Daniela Alvarez) played tennis at Clemson from 2003-06.

“My cousin Daniela came here and played for our women’s team,” explained Alvarez. “I was looking for schools, and after talking to her, she spoke with Coach McCuen and that’s how I ended up coming to Clemson.”

Before becoming a Tiger, Alvarez, who is an industrial management major, had been based in Spain for six months and then moved to Argentina in 2003, where he lived for three years.

“I was living in Buenos Aires (Argentina),” he said. “That’s where I trained and where I had my coach. So I would go home for a month or so, or just to visit.

“The tennis opportunities in Argentina were definitely better, and I can probably say that there were fewer distractions of a social nature than in Bolivia. I was more focused just playing tennis.

“I really like the Clemson environment and the coaches. It didn’t take me long to make my decision to come to Clemson. Getting a degree from Clemson is very important to my family and me.”

Alvarez has had an outstanding career, but it has taken hard work. His game was really suited to the claycourt game, not the hardcourts he plays on while competing for the Tigers.

“I am a better claycourt player,” admitted Alvarez. “On the hardcourts, I have improved in many areas and have learned how to play on that surface.

“In Bolivia, I think almost every South American player is a baseline player,” continued Alvarez, who likes to dictate points with his forehand. “My coach used to say that I’m the ultimate grinder. I run a lot and I’m not the kind of player who’ll serve and volley that often in a match.

“But even though I like to play the baseline, I’ve been working and am better as far as attacking. I’m trying to incorporate that into my game so that I can be a better overall player. It’s not enough just to play from the baseline at #1, because against the better players, you have to be able to attack at some point.”

As a freshman, Alvarez had a great introduction to ACC play. “In my first ACC match as a freshman at Clemson, we were playing Florida State and it was 3-3. I was the last guy on the court, so I had to clinch the match at 4-3. When I clinched the point, everyone went crazy, so that was very memorable for me.”

“Carlos is incredibly valuable,” added McCuen. “He’s feisty, competitive, and passionate about the game. He brings so much to the court every day and he’s a wonderful role-model.”

Sam Blackman is Clemson’s Senior Associate Sports Information Director and is in his 23rd year at Clemson.