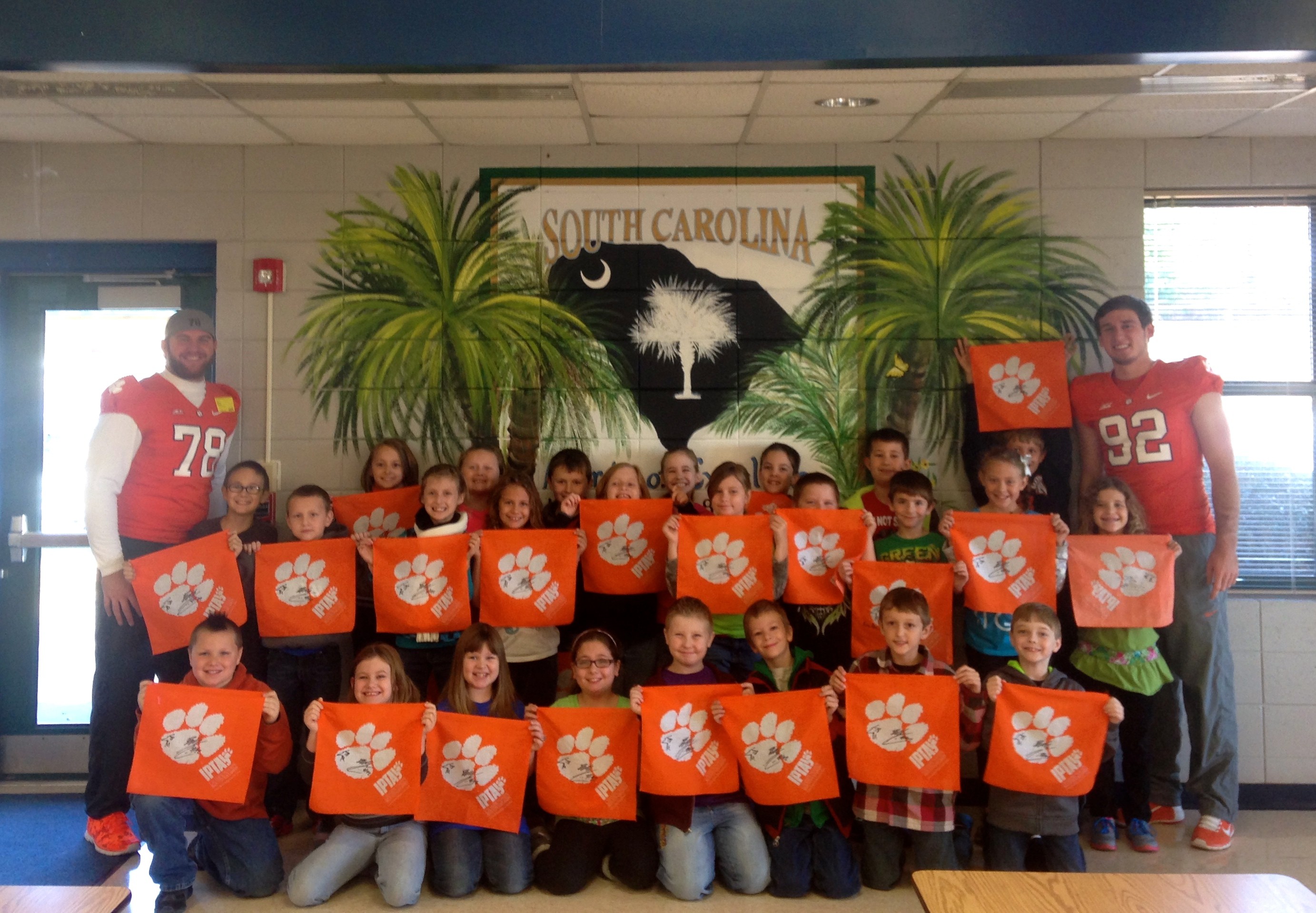 Serving the community has always been a priority for Clemson student-athletes. In the 2014 fall semester, Clemson student athletes completed approximately 805 hours of service in the Clemson community and its surrounding areas. The Clemson Women’s Tennis team completed the most hours per student athlete while the Clemson Football team compiled 347.5 service hours, the most overall out of the 15 Clemson teams.

As the school year began, requests for service around our community came pouring in.  In August, the Clemson women’s basketball team helped with freshman move-in day at Clemson House. They volunteered all morning, helping new Clemson students and their parents move their belongings into their dorm rooms.

In September, the entire Clemson football team volunteered with Habitat for Humanity and helped build a house in a local Anderson neighborhood. In the latter half of the month, student-athletes from numerous Olympic sports assisted with a tour of the Clemson football facilities for local students with special needs. Also, the women’s tennis team volunteered at Collin’s Children Home, helping to serve food to the children. To wrap up September, Abby Jones (Women’s Soccer) spoke at an FCA rally at Liberty High School and Bobby Belair (Men’s Soccer) spoke at Pendleton Elementary about the importance of good behavior in school.

In October, student-athletes from numerous sports spoke to middle school students in the West End Zone about the importance of education. At Homeland Park Primary School in Anderson, Taylor Watson (Football), Bradley Pinion (Football) and Manolo Sanchez (Men’s Soccer) participated in the school’s “Real Men Read” program, reading books to young male students. Towards the end of the month, Manolo Sanchez (Men’s Soccer) and Haleigh Hampton (Volleyball) each served as mentors at Duncan Chapel Elementary in their FAME and CHAMP mentoring programs. We had numerous schools request Be-A-Tiger assemblies in October and numerous student-athletes helped with those at many surrounding schools. Also in October, a handful of Clemson rowers volunteered with Habitat for Humanity and continued work on the house that Clemson football began work on in September.

In November, the entire Clemson women’s basketball team volunteered at Kids Stuff Academy, talking with the kids about education and behavior. In mid November, the entire Clemson baseball team visited a sick child in a Greenville Hospital, and encouraged him to stay positive. To wrap up our semester of service, both Clemson men’s and women’s basketball teams volunteered at the annual Tiger Wonderland event, in which all the players and coaches ate dinner with local kids and helped them open Christmas presents.

Finally, throughout the semester, our women’s tennis and men’s soccer teams served as pen pals in our Tiger Pals program. Each student-athlete had at least one local elementary school student in which they corresponded each week through letters emphasizing the importance of displaying the Be-A-Tiger character traits.

Overall, the fall 2014 semester was a success and we are very proud of the work our student-athletes are doing in the community!