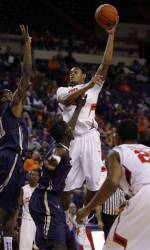 Clemson Struggles Offensively, Falls 61-48 to UTEP in Opening Round of Diamond Head Classic

HONOLULU – Clemson began and ended the game cold from the field and as a result fell to UTEP, 61-48, in the opening game of the Hawaiian Airlines Diamond Head Classic. The Tigers went nearly 12 minutes without a field goal in the second half as UTEP put together a 14-3 run to ice the game for Tim Floyd’s squad. With the win, UTEP improved to 5-5 on the season and Clemson fell to 6-5.

K.J. McDaniels led the Tigers in the game with a career-best 13 points. Andre Young was held in check, as he scored six points and did not make a three for the second straight game.

Scoring was difficult to come by early in the game for the Tigers. Clemson did not score until the 14:09 mark when McDaniels came off the bench to spark the Tigers. He scored the Tigers’ first five points and 10 of the team’s first 12 points in the game. Coming into Thursday, his previous best was seven points at Arizona.

McDaniels really put the Tigers on the back when he hit a three-point basket with 8:17 left in the half, and then followed moments later with a breakaway slam dunk to pull Clemson with 15-12. The Tigers again trailed 24-18, but scored the final six points of the half and held UTEP scoreless in the final 3:09. Rod Hall hit a pair of free throws to tie the score at 30.2 seconds left before the break.

The momentum continued after the half for the Tigers, who got a three in transition from Tanner Smith to give Clemson its first lead at 27-24.

Andre Young to Catalin Baciu, who threw down a dunk.

UTEP found its shooting stroke from the outside in the second stanza. Little-used guard C.J. Cooper was inserted into the lineup, and he promptly hit three outside shots to help put the Miners up by a score of 49-42. Clemson went several minutes again without scoring. After Young hit a pair of free throws due to a technical foul, the Tigers did not score for eight minutes until Devin Booker knocked in a free throw.

The Tigers had difficulty guarding UTEP sophomore Michael Perez, who cruised to a career-high 25 points. He hit 8-of-12 from the field, including 3-of-6 from three-point range and 6-of-7 from the charity stripe. Cooper added 11 in the second half for the Miners.

The Tigers take on the loser of the second game, Kansas State vs. Southern Illinois. The game will be played at 3:00 PM Eastern and will be televised by ESPNU on Friday.